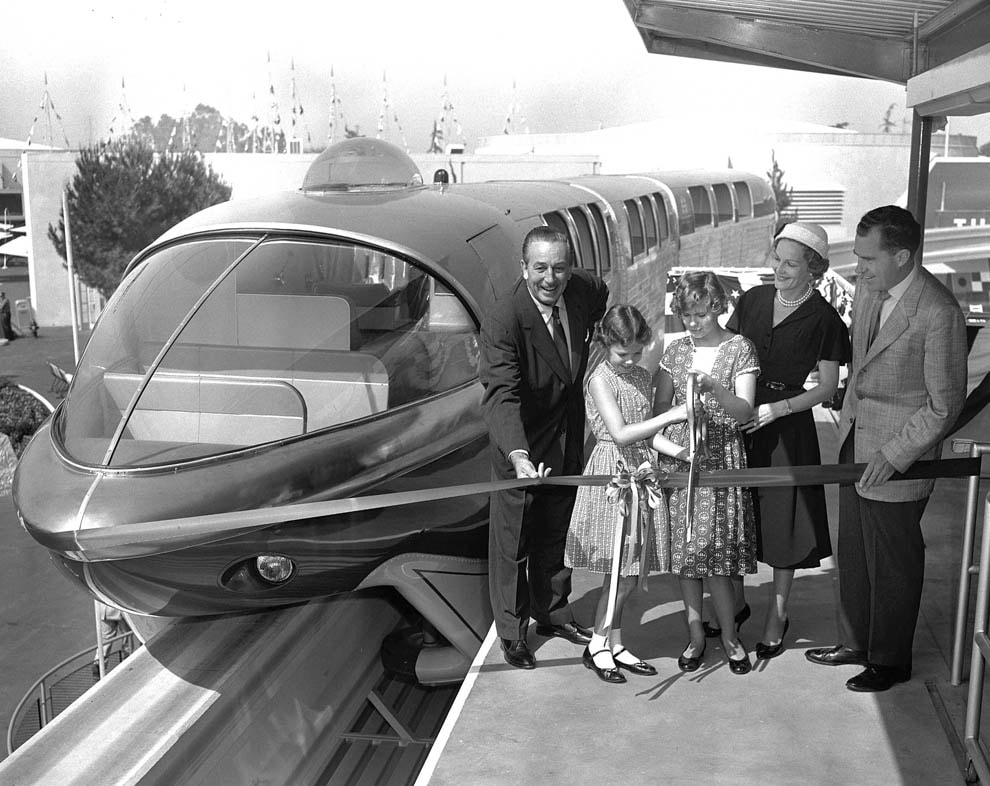 A Look Back at June 14, 1959: Grand Opening of the Disneyland-Alweg Monorail System, Matterhorn Bobsleds and Submarine Voyage at Disneyland Park

The first major expansion of Disneyland park included three brand-new attractions so special they helped usher in a brand-new era of something called an “E-Ticket.” As he had four years earlier, Walt Disney planned to share the celebration of this expansion with a national television audience during a television special hosted by Art Linkletter on ABC. Walt invited more than 2,000 members of the press, celebrities and dignitaries to attend, including Vice President Richard Nixon, his wife, Pat, and their daughters, Tricia and Julie, who sent us a special message you’ll read later in this post.

Walt Disney sent the following letters to the vice president in May of 1959 as he was finalizing his plans for the biggest event since he opened the park.

With assistance from the Walt Disney Archives and the Nixon Presidential Library I was able to piece together details from this event as well as solve some lingering “mini-mysteries” from the festivities of Sunday, June 14, 1959, that might surprise you. 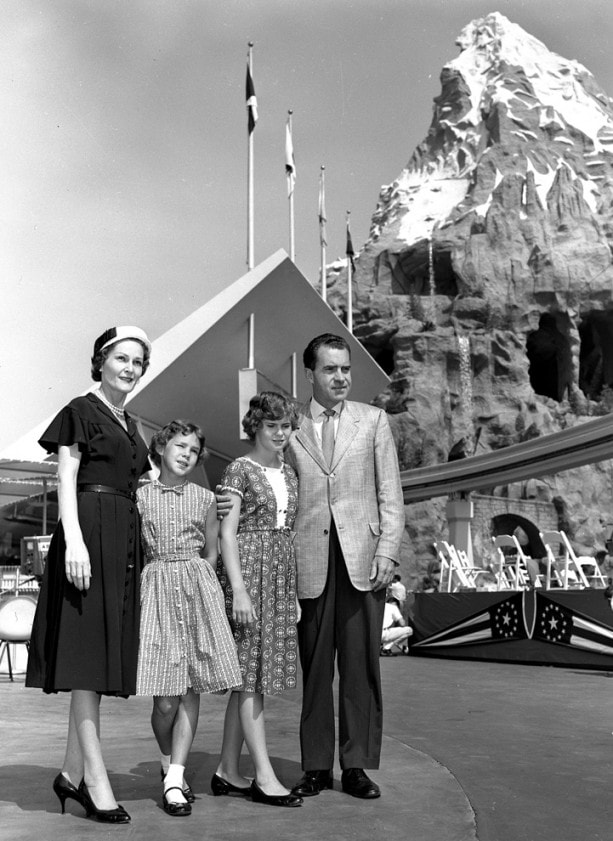 Using the text of the actual itineraries, finalized just two days before this event, here’s how the day unfolded: 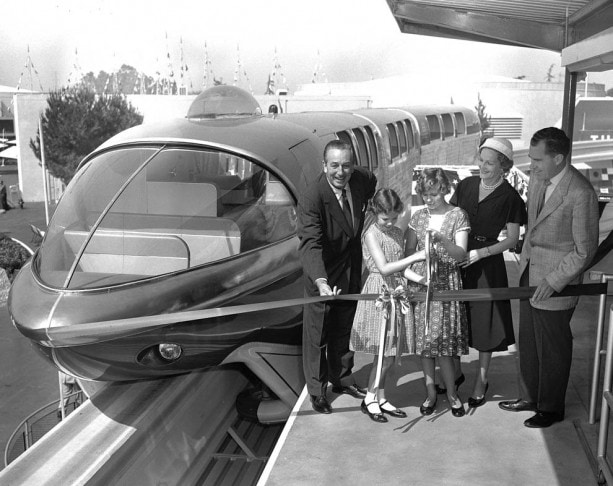 With this morning publicity photo shoot we have the answer to one of those “mini-mysteries” I mentioned. Fans may have noticed that the Nixon family is wearing different clothing in some of the Monorail dedication photos from this day. As it turns out, these early-morning pictures, which include Art Linkletter as the Monorail pilot, were taken to enable wire services and newspapers east of the Rockies to include the photography in their Monday morning editions. Press photographers and television cameras would capture the official dedication later in the afternoon. 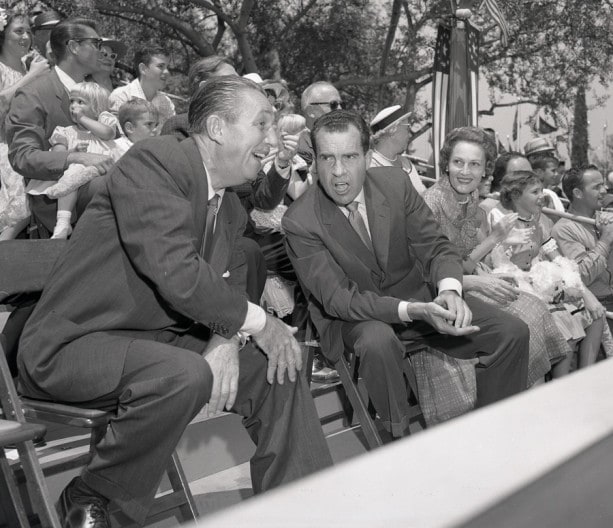 The reviewing stand for this special parade was built at the central hub of the park with a clear view down Main Street, U.S.A. In this photo, Walt is seen talking with the vice president as Mrs. Nixon looks on. Seated behind the Nixon family you’ll also see Roy O. Disney, his wife, Edna, and Walt’s son-in-law, Ron Miller with two of Walt’s grandchildren on his lap. 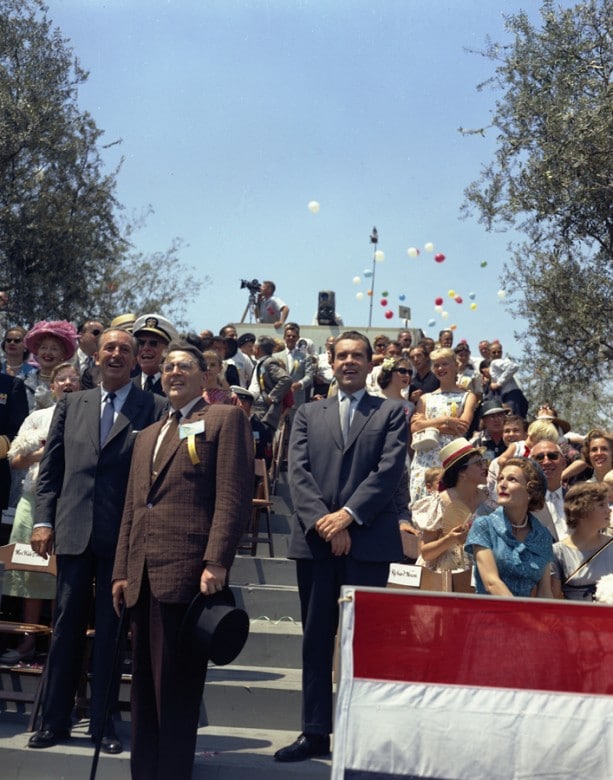 This fun photo captures one of my favorite moments from this day. Look closely at this rare color picture and you’ll see Hayley Mills, Roy O. Disney and Diane Disney Miller in the background. The man pictured between Walt Disney and Vice President Nixon is Meredith Willson, composer of the smash hit musical, “The Music Man,” which was still in its first theatrical run on Broadway at the time. Mr. Willson was an invited guest of Walt’s who was seated behind the vice president. During the television taping of this special parade, host Art Linkletter says, “What do I see down there? Meredith Willson, would you come up here for a minute?” Mr. Willson then came to the front of the reviewing stand. Art continued, “I want to hear from an expert. You’re ‘Mr. Music Man,’ what do you see coming up the street?”

To Mr. Wilson’s apparent amazement, what he saw was an all-brass band including 76 trombones, marching down Main Street, U.S.A., playing his signature song from “The Music Man,” “Seventy Six Trombones!” Mr. Willson could be overheard saying, “I’ve been saying it all afternoon, but Walt Disney, when he does anything, he does it right, doesn’t he? Listen to that!” 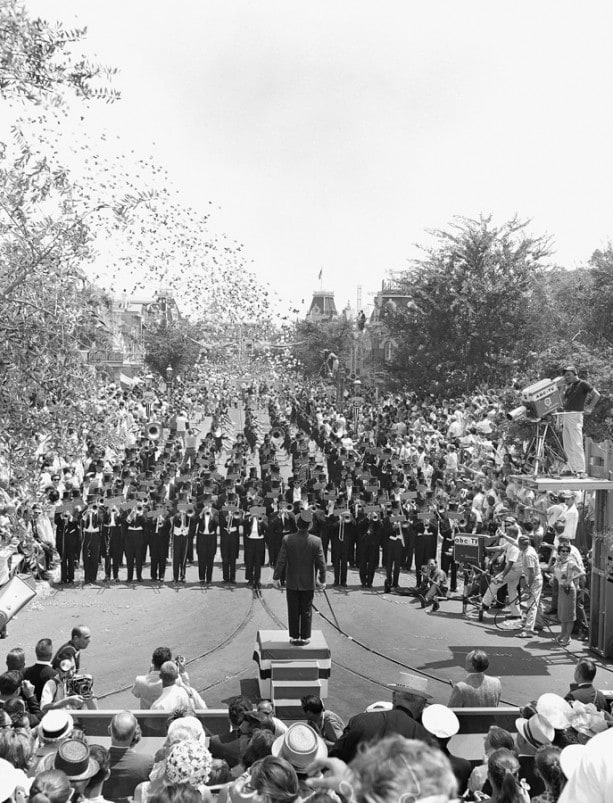 As this incredible band approached the reviewing stand, Art led Mr. Willson to a small platform in the middle of the street, telling him, “Come on up here Meredith!” The drum major handed his hat and baton to Mr. Willson who then conducted the band to the finale of the song as the crowd roared from one end of Main Street to the other. 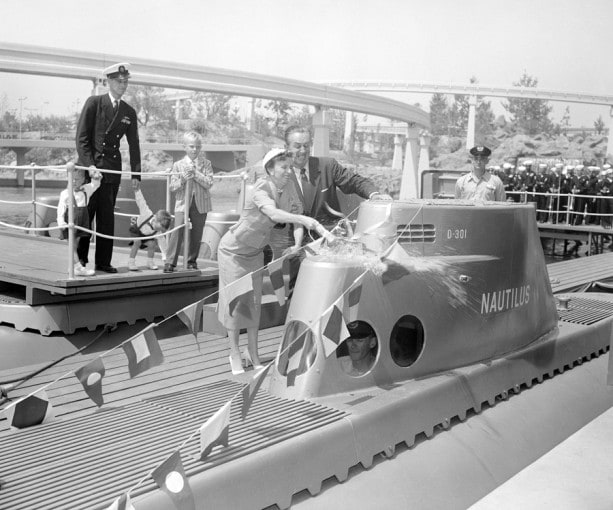 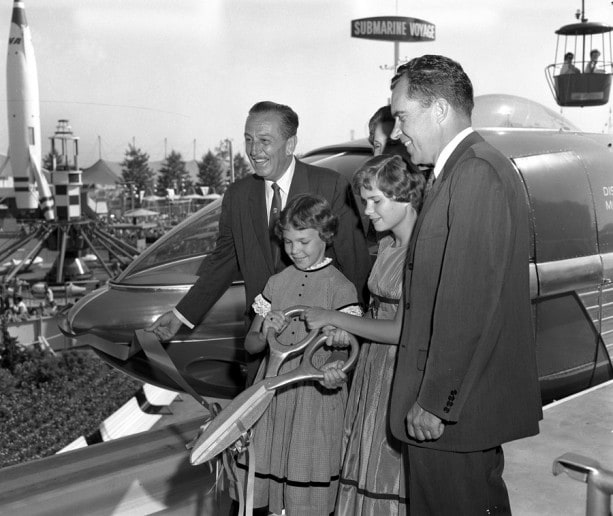 In these photos taken during the afternoon press photocall and official dedication of the Monorail, you can see the large scissors that Tricia and Julie Nixon used during the ceremony. What isn’t clear from these photos is that the scissors weren’t exactly cooperating. The stubborn dedication ribbon required Walt Disney, himself, to step in and help the Nixon daughters — just a little. 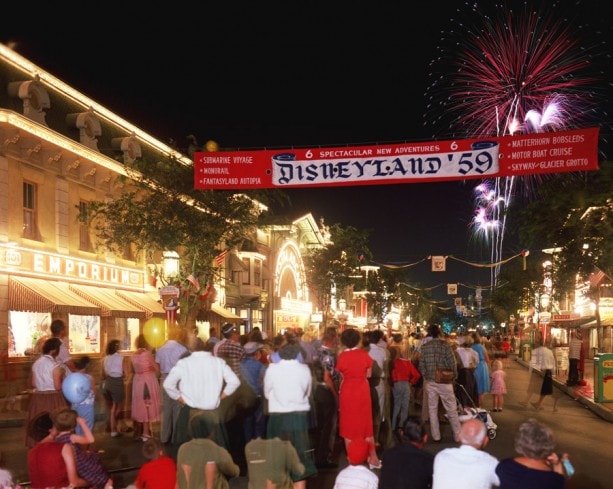 Walt invited the Nixon family back two years later when the Monorail track was expanded to include the Disneyland Hotel. In this letter, Walt also mentions those pesky scissors from the 1959 event. 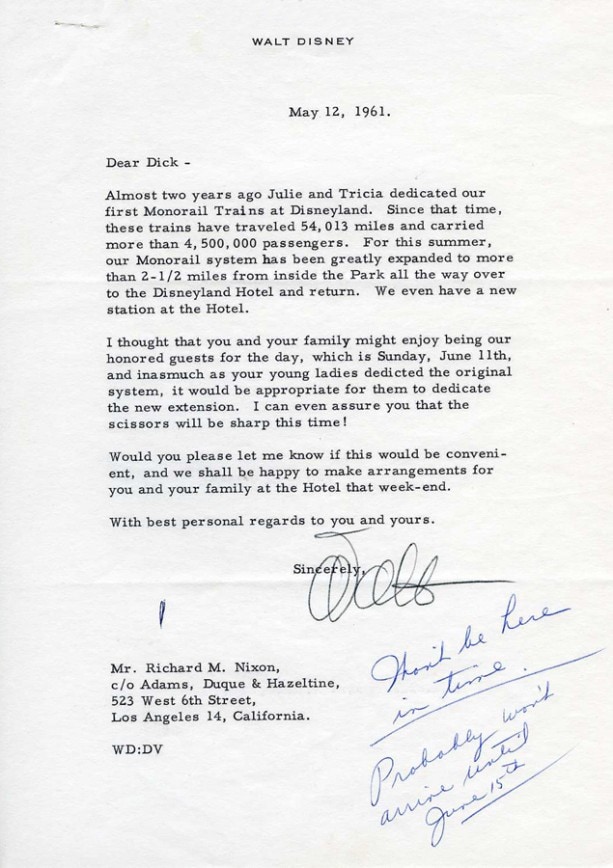 As you can see from the handwritten assistant’s note at the bottom of this letter, the Nixon family was unable to attend due to the former vice president’s travel schedule, but they did visit Disneyland again later that summer and at least one more time, in the late 1960s.

On the occasion of the 55th anniversary of this landmark day in Disneyland Resort history, Tricia Nixon Cox and Julie Nixon Eisenhower sent the following message exclusively for Disney Parks Blog readers:

“We are pleased and excited to join Disney fans around the world in celebrating the 55th anniversary of the iconic Disneyland Monorail. When we cut the ribbon and took the very first Monorail ride on June 14, 1959, we could not have imagined what a popular icon it would become. For over five decades, it has provided countless families that special Disney experience – just as it did ours.

“Our family visited Disneyland as often as we could. It was then – as it is now – truly the ‘happiest place on earth,’ thanks to the visionary Walt Disney. Our parents cherished Walt’s years of friendship, not to mention his warmth, creativity and contagious sense of humor. He was, on that warm June day, charming as ever. His excitement for life has inspired millions across the globe.

“We send our best wishes on this special day of celebration. Congratulations to Disneyland, and may it continue to inspire joy and hope, as it has done for us for nearly 60 years.”

Likes (3)
Share A Look Back at June 14, 1959: Grand Opening of the Disneyland-Alweg Monorail System, Matterhorn Bobsleds and Submarine Voyage at Disneyland Park