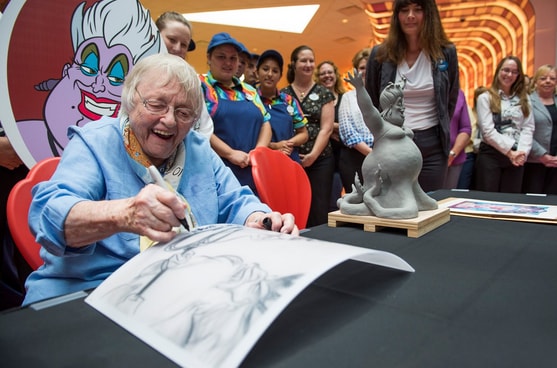 Guests at Disney’s Art of Animation Resort recently had an under the sea surprise as they joined in a ceremony in the main lobby to celebrate Pat Carroll, the voice of Ursula in Disney’s classic animated film, “The Little Mermaid.” The resort honored the legendary actress by asking her to add her signature to the feature chandelier’s artful array of 77 animation storyboards.

This year marks the 25th anniversary of “The Little Mermaid.”

Only a few dignitaries who have made major contributions to the four animated films represented at Disney’s Art of Animation Resort can sign the chandelier storyboard panels. As an added surprise, Walt Disney Imagineer Joni Van Buren, who sculpted the maquette used to create the resort’s giant Ursula icon, joined the fun and even brought her original work to show to guests and Pat.

After the ceremony, Pat sat down with us to discuss her love of the Ursula character, the 25-year popularity of “The Little Mermaid” and how the power of great storytelling can captivate film audiences.