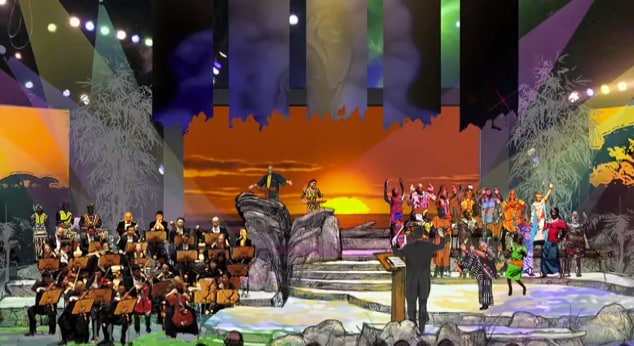 Back in 1998, I had the good fortune to be part of the opening team in Africa at Disney’s Animal Kingdom. Thanks to the impressive work of the Imagineers who created it, the park’s fictional village of Harambe became a very real place to us, with a rich history and vibrant population. The village took its name from the Swahili word “harambee,” which is roughly defined as “pulling together to create something greater than its parts.” For Harambe Nights, the new special event debuting at Disney’s Animal Kingdom this week, the citizens of Harambe village are doing just that to create an epic theatrical celebration of Disney’s “The Lion King.”

“On this grand occasion of the film’s 20th anniversary, the people of Harambe have pulled together to present the beloved ‘Lion King’ story to visiting guests in a new way,” said Show Director Marsha Jackson-Randolph. “The village storyteller hosts, the Harambe choir sings, the best dancers dance, and the Sangoma shaman works his mystical powers as iconic scenes of the film appear to come to life in the authentic African tradition of a ‘Story Circle.’ And there’s more excitement! Harambe’s Town Council has invited a 25-piece guest orchestra and a celebrity guest narrator to join them each night.”

During a recent rehearsal, Marsha gave us a behind-the-scenes look at some of the tremendous work going into the staging of this all-new show, “The Lion King – Concert in the Wild,” and her close collaboration with noted South African Choreographer Warren Adams, whose impressive credits include Broadway’s “Motown the Musical,” the Hong Kong production of “The Lion King,” “Of Mice and Men” with James Franco, and “Hedwig and the Angry Inch” starring Neil Patrick Harris.

I got goose bumps just watching the cast rehearse and can’t wait to see all the elements of the show come together in the Harambe Theatre. Of course, the only way to experience “The Lion King – Concert in the Wild” for yourself is to get a ticket to Harambe Nights, and they’re going fast!

Tickets are $119 for adults, $79 for ages 3-9, plus tax, and include parking, a Welcome Reception, the 55-minute theatrical experience, two hours of additional live entertainment during the Harambe Nights Street Party, and amazing food and drinks throughout the evening. For tickets, visit Disneyworld.com/HarambeNights or call 407-939-1319.