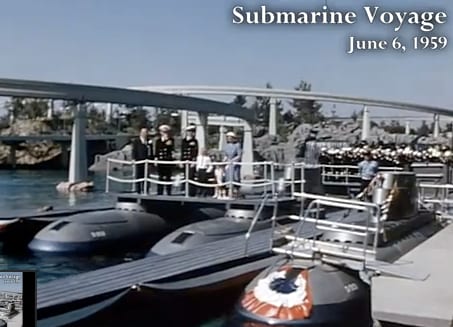 Celebrating the First Voyage Through ‘Liquid Space’ at Disneyland Park

It was 55 years ago today that guests were treated to one of the very first E-ticket attractions at Disneyland park – one that would take them through “liquid space” and under the North Pole. That underwater attraction was called Submarine Voyage and the experience included an encounter with a giant squid and even mermaids!

In 2007, the attraction reopened as Finding Nemo Submarine Voyage, and eight submarines, painted bright yellow, were recommissioned to take guests on a new underwater adventure. This time, new animation technology brought to life the popular characters from the Disney•Pixar film, “Finding Nemo.” I hope you enjoy a journey back in time to the opening days for this guest favorite.

And stay tuned to the Disney Parks Blog over the following week for more looks back on the 55th anniversary of the Disneyland Monorail, Matterhorn Bobsleds and Submarine Voyage!