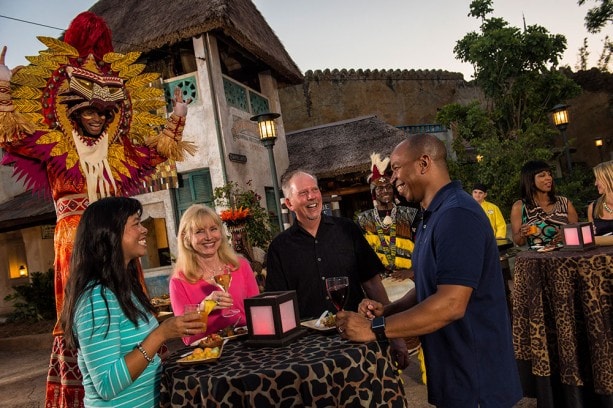 A Harambe Nights evening includes a 55-minute theatrical extravaganza, “The Lion King Concert in the Wild,” which features a celebrity narrator, live orchestra, choir and special effects in a retelling of the story of Simba.

Alex and Ani Add ‘Character’ to the Disney Parks Collection – Wear your Disney Side with these signature wire bangles with icon charms inspired by Disney Parks and characters!

Heidi Klum Meets Mickey Mouse at Disneyland Park Take a look at this fun photo of this unique pair of skippers on the Jungle Cruise boat.

First Look at La Mascarade d’Orleans at Disneyland Park – Get a feel for this new shop, which takes after the storefronts of the French Quarter in New Orleans, coming to Disneyland park later this month.

Disneyland Resort is Going to Make Your Mondays Happier this Summer – Every Monday this summer, Disneyland Resort will be surprising you with new ways to #GetHappier. Click through to learn more!

New Haunted Mansion Merchandise Materializing This Fall at Disney Parks – The Haunted Mansion at Disneyland park will celebrate 45 years this August. Take a look at some of these home goods in celebration of the occasion. They’re spooky good.

Guests Celebrate Seven Dwarfs Mine Train at Magic Kingdom Park With Acapella Version Of ‘Heigh Ho’ – Watch as Walt Disney World Resort guests show off their Disney Sides by singing “Heigh Ho” after the opening ceremony of this new attraction.