Over the weekend, Disneyland Paris previewed La Place de Rémy – a new area dedicated to the Disney•Pixar movie “Ratatouille.” The special themed-area will bring the storybook world of Ratatouille to life when it officially opens in just weeks – on July 10, 2014. 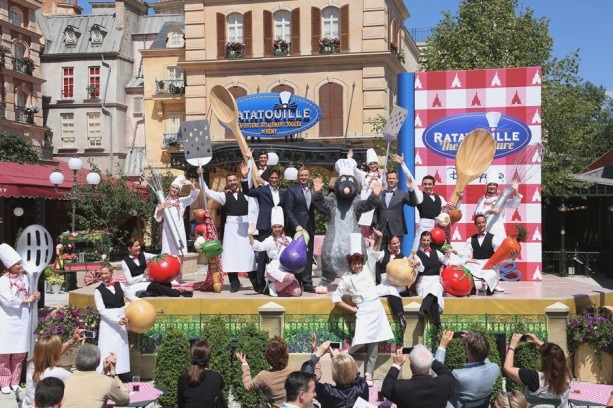 “When we turn amazing worlds that may only exist in our imaginations or on film into multi-dimensional theme park experiences, we give our guests the opportunity to step into a story that they love. And Ratatouille is a fantastic example of that,” Tom said.

La Place de Rémy will feature the new Ratatouille, l’Aventure Totalement Toquee de Remy attraction that we told you about here on the Disney Parks Blog. The new attraction whisks guests into a crazy, culinary adventure in one of the capital’s most chic dining establishments, Chez Gusteau, offering a comical rat’s eye view into the world of Remy. Guests begin their adventure on the rooftops of Paris before boarding ratmobiles to scurry though the restaurant’s cold store and dining room overseen by the intimidating Chef Skinner.

And with a design inspired by the French capital represented in the movie, the area will also include Bistrot Chez Rémy, a table-service restaurant, and a special boutique, Chez Marianne (Souvenirs de Paris) – which opens at the end of the 2014.

Let us know in the comments what you’re looking forward to experiencing at La Place de Rémy.