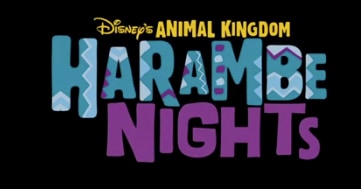 “The Lion King – Concert in the Wild,” the incredible theatrical experience produced for Harambe Nights at Disney’s Animal Kingdom, celebrates the 20th anniversary of “The Lion King.” This all-new show is a 55-minute retelling of Simba’s story as never seen before, combining music, dance, and spoken word, all performed in the spirit and style of African cultural traditions.

In “The Lion King,” Simba’s father, Mufasa, invites him to look to the stars. “The great kings of the past look down on us from those stars,” he says. “So whenever you feel alone, just remember that those kings will always be there to guide you, and so will I.”

This and other wonderful messages and moments from that classic film have resonated with people the world over, including the stars participating as celebrity narrators for “The Lion King – Concert in the Wild.” For the opening night performance earlier this month, we were honored to be joined by Viola Davis, Tony award winner and Oscar nominated star of “The Help,” “Doubt,” and the upcoming ABC drama “How to Get Away with Murder.” She shared with us her impressions of the performance, as well as her personal connection to one of the main messages of the film.

Harambe Nights continues every Saturday evening through August 9, 2014. The lineup of celebrity guest narrators features acclaimed and award-winning actors and actresses from film, TV, and Broadway, each bringing their own passion for “The Lion King” story. Scheduled to appear*:

Every event night so far has sold out, but great seats are still available for each of the remaining dates in July and August. You’ll need to act fast, though! Tickets are $119 for adults, $79 for ages 3-9, plus tax, and include parking, a Welcome Reception, “The Lion King – Concert in the Wild,” two hours of additional live entertainment during the Harambe Nights Street Party, and abundant food and drinks throughout the evening. For tickets, visit Disneyworld.com/HarambeNights or call 407-939-1319.