We’re halfway through the 10-week run of Harambe Nights, our new special event at Disney’s Animal Kingdom celebrating the 20th anniversary of “The Lion King.” Guests have been raving about the African-inspired cuisine, the street party entertainment, the celebrity narrators, and the live orchestra and choir for “The Lion King – Concert in the Wild.” 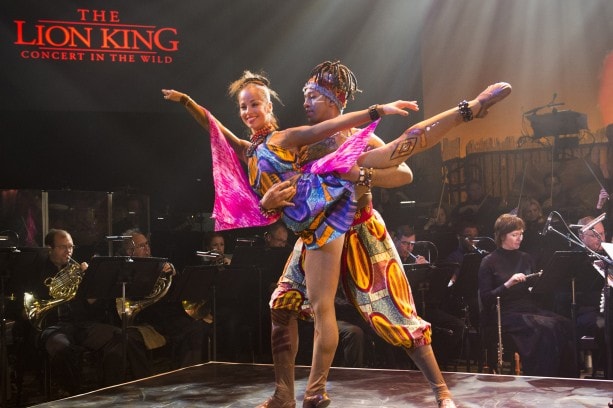 Held inside the newly built Harambe Theatre, “The Lion King – Concert in the Wild” is a 55-minute theatrical experience created exclusively for Harambe Nights and completely different from the “Festival of the Lion King” show presented during the daytime. In fact, today we have for you a unique look at how the Harambe Theatre is transformed from day to night, as our Entertainment team sets the stage for “The Lion King – Concert in the Wild.”

From Viola Davis to David Alan Grier, each celebrity narrator who has participated in “The Lion King – Concert in the Wild” has brought his or her own unique talent and passion to the performance. The lineup of narrators features stars from movies, TV, and Broadway. Scheduled to appear on upcoming nights are*:

The first five weeks of Harambe Nights were all sold out, but great seats are still available for each of the remaining dates in July and August. You’ll need to act fast, though! Tickets are $119 for adults, $79 for ages 3-9, plus tax. Your ticket includes parking, a welcome reception with drinks and hors d’oeuvres, “The Lion King – Concert in the Wild” show, two hours of additional live entertainment during the Harambe Nights Street Party, and an abundant dinner buffet. For tickets, visit Disneyworld.com/HarambeNights or call 407-939-1319.

For an even more in-depth look at “The Lion King – Concert in the Wild,” follow the links below to our previous stories here on Disney Parks Blog.