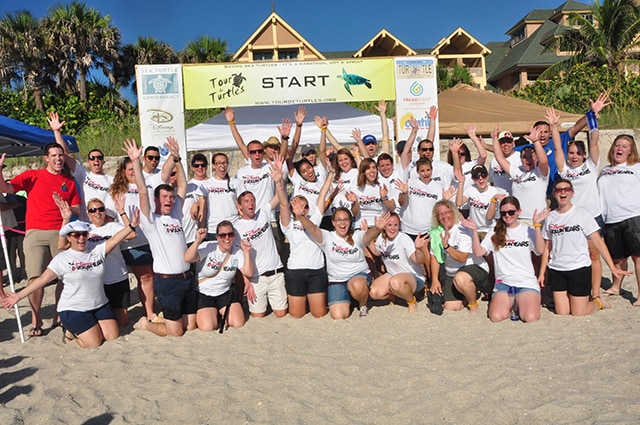 Wildlife Wednesday: On Your Mark, Get Set… Let Them Go! – Sea Turtles Set Off On Migratory Journey

This year, Olaf’s summer dream in the Academy Award winning Disney Animation Studios film “Frozen” inspired us to feature him in our event and name the turtles after his friends Anna and Elsa. The morning began as each loggerhead sea turtle was outfitted with a satellite transmitter. Now that the females have finished nesting for the season, it is time for them to head to their foraging grounds so that they can begin feasting on those tasty crustaceans. The transmitters allow us to track the path to Anna and Elsa’s favorite foraging grounds.

As the “turtle safe” adhesive dried, guests had the opportunity to participate in various activities as they learned more about sea turtles and earned stamps for completed activities in their nature journal. Guests watched as Disney’s Animal Programs cast members conducted a nest inventory and counted the number of eggs in a recently hatched sea turtle nest; discovered ways they can help hatchlings including knocking down sand castles after they leave the beach, and realized how difficult it could be for a sea turtle to free itself if tangled in plastic debris.

Each sea turtle involved in “Tour de Turtles” acts as an ambassador to raise awareness about a specific threat to sea turtles. Sea turtle ‘Anna’ (sponsored by Disney’s Animal Programs and Disney’s Vero Beach Resort) is swimming to raise awareness about light pollution. Many don’t realize that bright beachfront lighting from buildings and flashlights from people walking on the beach can deter nesting turtles, draw hatchlings inland and prevent them from safely reaching the ocean. It’s important to close your curtains to prevent light from shining on the beach or using sea turtle-friendly fixtures that shield the light from the beach and never use a flashlight during sea turtle nesting season at night! Sea turtle ‘Elsa’ (sponsored by the Disney Worldwide Conservation Fund) is focused on the troubling amount of plastic debris in oceans around the world. The debris breaks into small pieces that are eaten by sea turtles and other marine wildlife, which causes the animals severe digestive troubles. Over the years, the consumption of this plastic debris has caused the deaths of over 100 million marine animals and floating marine debris can also lead to turtles becoming entangled in plastic, fishing line, nets and more. You can help by picking up litter, purchasing reusable grocery bags, recycling, and not releasing balloons.

Youth from the local Boys & Girls Club learned all about how scientists develop tracking devices to monitor sea turtle migration pattern in the ocean and had a front row seat to watch Anna and Elsa’s return to the ocean. Everyone wished Anna and Elsa well on their ocean journey and we look forward
to their return when they are ready to lay more eggs in two years. Check out the gallery below for more photos from the event!

Wildlife Wednesday: On Your Mark, Get Set… Let Them Go! – Sea Turtles Set Off On Migratory Journey

You can cheer on Anna, Elsa and other turtles that are part of Tour de Turtles by logging on to http://www.tourdeturtles.org/. You can track the migration paths of 4 species of sea turtles and learn more about sea turtle conservation. 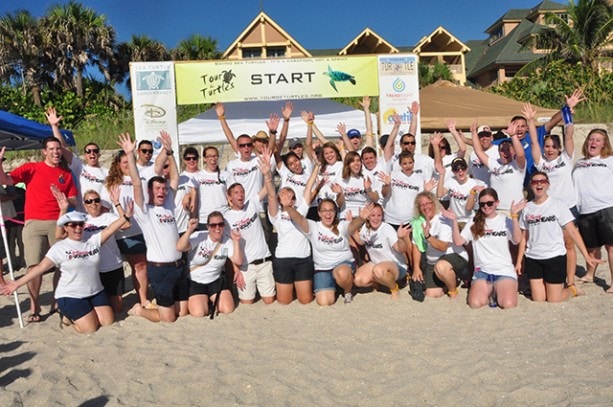 For more from the “Wildlife Wednesday” series, check out the posts below:

Likes (0)
Share Wildlife Wednesday: On Your Mark, Get Set… Let Them Go! – Sea Turtles Set Off On Migratory Journey