When it comes to running, Jeff Galloway is a rock star. And if you don’t want to take my word for it, stop by the runDisney booth at a health and fitness expo and witness the line of people waiting to meet and get advice from this running legend.

runDisney fans know Galloway as the training consultant for runDisney. His Run-Walk-Run method is credited for getting thousands of people off the couch, running and crossing finish lines at Disney and races around the world. His warm southern charm combined with his passion to help every runner succeed, makes him adored by all who come in contact with him.

Galloway’s professional running career is historic and well documented. Running alongside Steve Prefontaine and Frank Shorter, he was a member of the 1972 Olympic Team in Munich, Germany. His extraordinary running resume includes winning the inaugural Peachtree Road Race 10K in Atlanta, winning the Atlanta and Honolulu Marathons, and a 7th place finish in the Boston Marathon.

One might think an athlete with those credentials is unapproachable and incapable of relating to the average runner, however with Jeff Galloway, those preconceived notions are far from the truth. With his competitive juices evaporated like the sweat from the thousands of miles he has logged, Galloway is committed to helping all of us become better runners and achieve our goals.

“What I have discovered is I get a whole lot more back in helping another person than I ever got in doing this for myself,” said Galloway. “I’m one runner trying to help another runner and that gives me tremendous joy.” 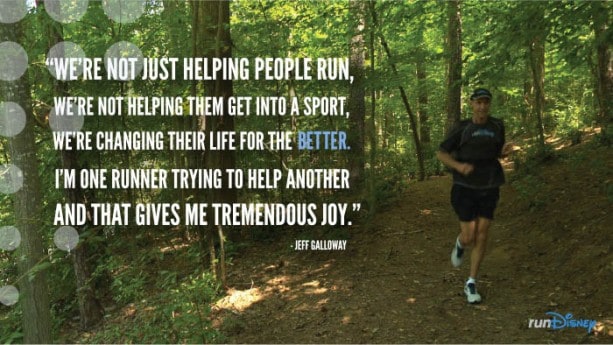 Practicing what he preaches, Galloway uses the Run-Walk-Run method in all of his races. At most events you will find him running alongside his wife of 37 years, Barbara. He credits his parents, both educators, for giving him the ability to teach. His professional running career provides the credentials and platform to be heard.

The accompanying video provides a small glimpse into Galloway’s spirit. He talks about what jump started his running career at the age of 13, his motivation for running today and his passion for runDisney.

I invite you to come out to a runDisney event to meet him in person and run with him during a race. One tip, when you meet Galloway ask about his unexpected path to the 1972 Olympic Team and the unselfish act of friendship and sportsmanship he demonstrated during the Olympic Trials. It is a story that will leave you in awe; it is a story that makes Jeff Galloway a legend on and off the course.

Jeff, thank you for what you do for runDisney and for runners around the world. You are changing lives, and in the end that is bigger than any medal and raises you higher than any winner’s podium.

As the official training consultant for runDisney, Galloway provides training plans for runDisney events. His plans and videos on how to get off the coach and use the Run-Walk-Run method to jump-start a healthy active lifestyle can be found at runDisney.com.

For more from the “Why I runDisney” series, visit the stories below: