Hamjambo! This is a Swahili greeting guests may hear at Disney’s Animal Kingdom as they make their way through Africa to experience the sights, sounds and attractions of the area inspired by the diversity of the country. Another Swahili term is ‘karibuni’ which means welcome. Guests who travel down the Pangani Forest Exploration Trail may be among the first to help welcome the newest member of the gorilla family troop! 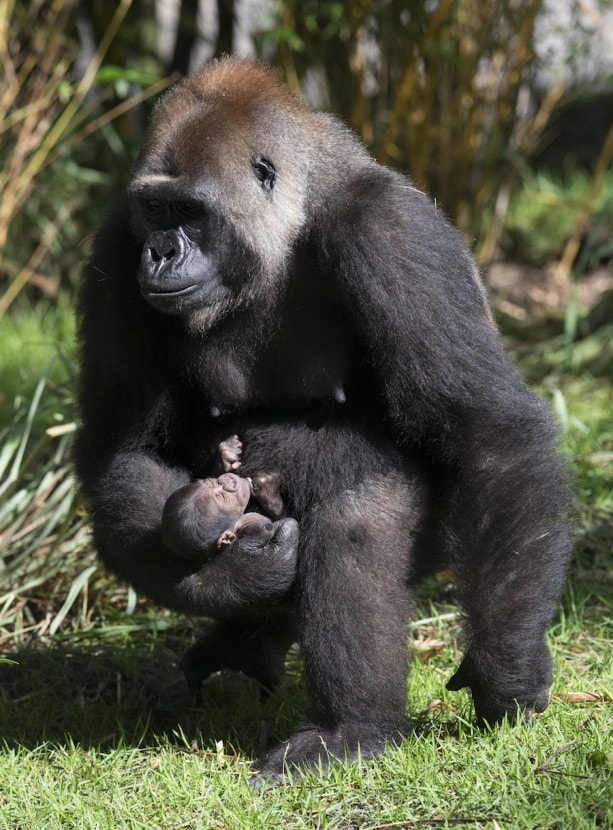 The Animal Programs team reported that mom, Azizi, has been doing great with her new baby boy. During the first days of an infant’s life, mom needs to learn how to locomote while the infant clings to her body. Nursing and learning how to cling to mom without assistance are among the first essential skills for this little guy. Usually, within the first week, the infant is clinging with all four limbs and mom may return to quadrapedal locomotion. As with any new baby, there is a lot of curiosity about the newest member of the group especially from 4 year old, Lilly. Both Azizi and Gino (silverback/dad) have been disciplining her appropriately if she gets too rambunctious. So far, she has touched him gently on the head.

The new baby, which is yet to be named, is the fourth gorilla born at Disney’s Animal Kingdom as part of the Association of Zoos and Aquariums (AZA) Species Survival Plan, which manages genetic diversity among species through detailed records of individual animals. The first gorilla birth at Disney’s Animal Kingdom occurred in 1997 before the park opened, the second baby arrived in 1999 and the third was born in 2010.

Join us in saying ‘karibuni’ to the newest member of the Disney’s Animal Kingdom family!