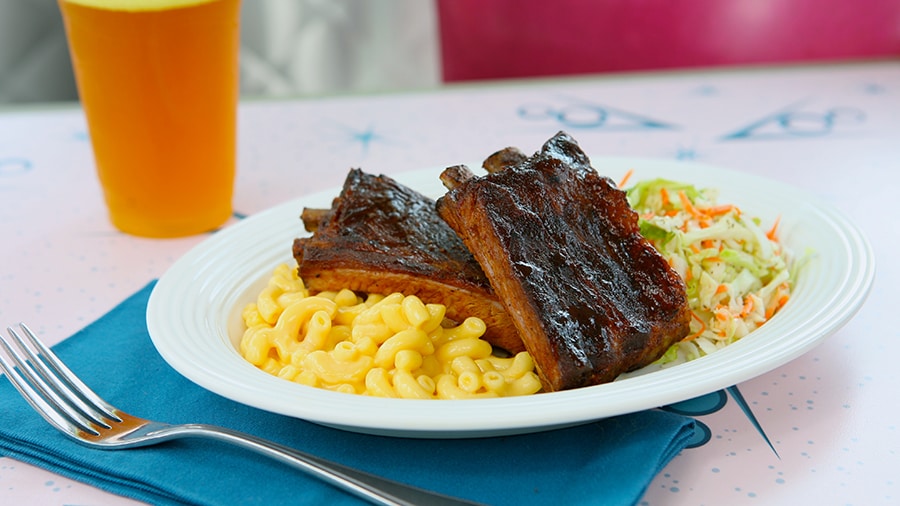 When you head for Cars Land at Disney California Adventure park, make a pit stop at Flo’s V8 Café to fill ‘er up. We’ve always been big fans of the Veggie-Tater Bake and any of Flo’s pies, but now there are new favorites vying for top spot on the menu.

Fall-off-the-bone barbecued pork ribs, with house-made Coca-Cola barbecue sauce replace the pork loin, served with creamy mashed potatoes and a side of crisp slaw. Also new is a hearty sandwich with shaved roast beef and cheddar on a garlic-chive bun topped with sweet, caramelized onions and kicky horseradish aioli, slaw on the side. The turkey dip also debuts on a potato grinder roll, with provolone cheese and turkey au jus for dipping and a side of pasta salad.

Ah, another pie joins the sweet line-up: coconut cream, making it tough to decide how to end the meal – maybe share that and the chocolate mud pie (or maybe the strawberry-rhubarb) with a friend.

Staying on the menu are the crowd-pleasing rotisserie chicken with mashed potatoes and veggies, ditto for the Citrus Turkey Salad, but with a twist: it’s now lettuce, cherry tomatoes, cucumbers and Craisins (those delightful dried cranberries) and a kicky citrus-tarragon dressing. And our favorite Veggie-Tater Bake is still there, a riff on shepherd’s pie made with bulgur wheat, roasted veggies, mashed potatoes and Cheddar cheese.

Do you have a favorite dish at Flo’s?