‘Ni kijana!’ is Swahili phrase that means ‘It’s a boy!’ This exciting exclamation was heard on September 3rd when we celebrated the arrival of a new baby in the gorilla family troop at Disney’s Animal Kingdom! Our avid Disney Parks Blog readers might be thinking, “Didn’t you just announce a new gorilla baby?” Yes, we did! This is the second gorilla birth this year, and the fifth in the park’s history. The first gorilla birth at Disney’s Animal Kingdom occurred in 1997 before the park opened, the second baby arrived in 1999 and the third was born in 2010. 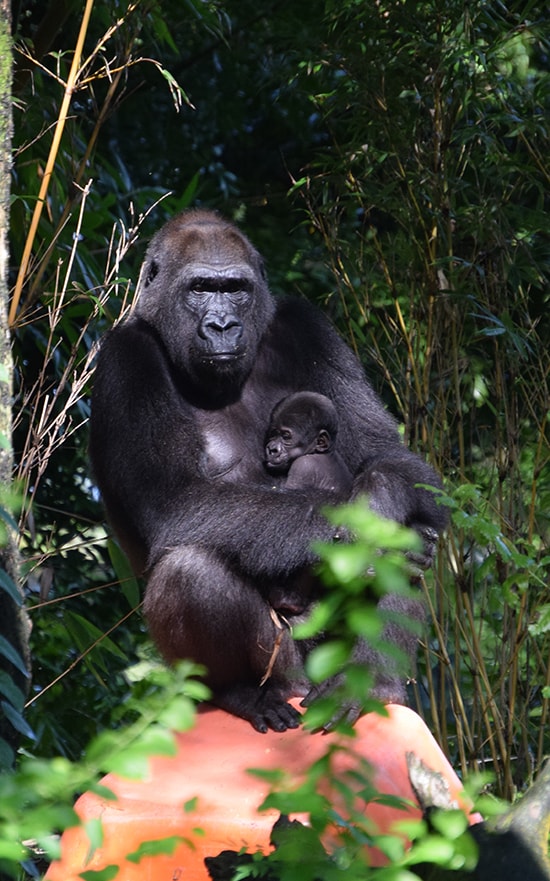 Western lowland gorillas are born with dark brown to black hair, black skin, and brown or reddish hair on their head. Mature males of breeding age develop silver or gray coloring on their backs and are consequently known as “silverbacks.” Juvenile and young-adult male gorillas are called “blackbacks” because they have yet to develop the silver markings. The diet of Western lowland gorillas is very diverse, including over 200 distinct species of plants, mainly leaves, buds, shoots, roots, bark and fruit. In the tropical rainforests of western Africa where they live, termites and ants are also great snack options. Unfortunately, West African rainforests are shrinking due to human encroachment and land clearing connected to agriculture and other pressures. Coltan is a mineral used in the production of cell phones, and mining for this mineral makes habitats unsuitable for gorillas and other wildlife. Recycling old cell phones and other electronics is a great way to reduce the need for coltan mining and, in turn, help conserve these amazing animals and their habitat. All Western lowland gorilla babies born at Disney’s Animal Kingdom have been a part of the Association of Zoos and Aquariums’ (AZA) Species Survival Plan (SSP), which ensures long-term survival of species by helping AZA-accredited zoos and aquariums manage species’ genetic diversity through detailed records of individual animals. Western lowland gorillas are a critically endangered species that face threats that include disease and illegal bushmeat hunting in the wild. In addition to supporting the gorilla SSP, Disney also contributes to gorilla conservation through the Disney Worldwide Conservation Fund (DWCF), which has provided more than $700,000 in conservation grants to 14 nonprofit organizations focused on research and conservation of Western lowland gorillas, cross-river gorillas, Grauer’s gorillas and mountain gorillas. While we celebrate and welcome the newest baby gorilla here at Disney’s Animal Kingdom, remember that you can join us in taking action to help gorillas and other wildlife. Recycle old cell phones to protect gorillas’ habitats from mining, and visit Disney.com/conservation to learn more about Disney’s conservation efforts and discover new ways to support conservation near you!

If you missed the last gorilla baby announcement, click here to view the story and catch up on all the excitement!