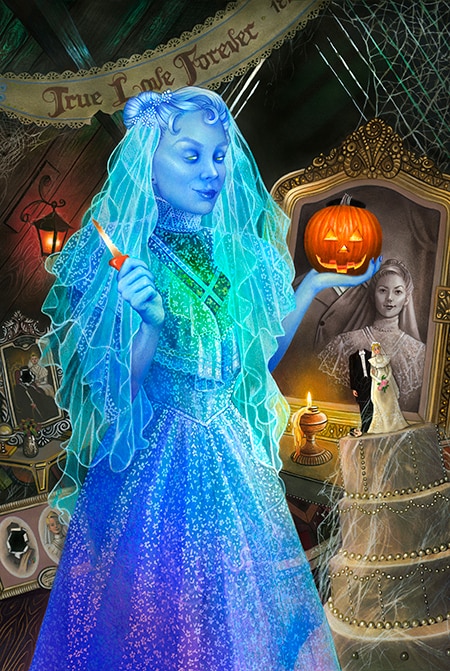 This week our Happy Haunts series is taking a look at the true lady of the house – The Bride. (This character’s storyline varies a bit at Haunted Mansion attractions around the world, so we’ll focus mainly on her appearance at Magic Kingdom Park).

Imagineer Ken Anderson developed one of the first storylines for the Bride, who was a young woman named Priscilla set to be wed to a sea captain named Captain Gore. Throughout this version of the attraction – which at first was being developed as a walk-through experience – guests would follow Priscilla as she found evidence that her love was actually a wicked pirate. Priscilla then vanished and was never seen again, although her spirit presence in the mansion was said to have driven the Captain mad. In another version of the Bride’s storyline, Walt Disney himself was set to narrate the attraction (think of Walt as the “Ghost Host”), and was to reference a bride character who had “lost her head” before the big day.

The Bride’s storyline was finally solidified when Imagineers Marc Davis, Claude Coats and X. Atencio were handed the project in the mid-1960s. Set in a creepy, cluttered attic full of shadows and surprises, the Bride waited for guests at the end of the room with a red pulsing heart and a flowing dress. Over the years, her storyline became more prominent, with wedding mementos placed throughout the attic, a louder thumping heartbeat, and the tune of the Wedding March plunked on a harpischord in the background. Later changes indicate that it was the groom that really lost his head inside the mansion: the Bride currently holds an ax, and nearby portraits of the happy couple reveal a headless groom when the lightning flashes.

In the artwork above, artist Morgan Davidson gave the Bride a Halloween twist. What do you think? Tell us in the comments section below!

For more Happy Haunts, check out the posts below: