If you were up early this morning, you may have spotted an unusual sight in the sky – the brilliance of a rare lunar eclipse called a “blood moon.” 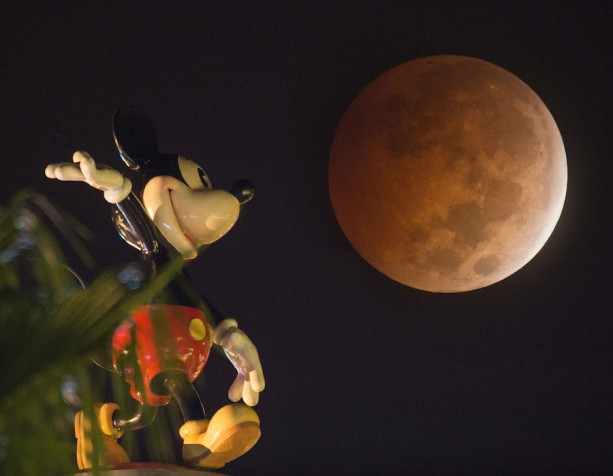 Here at Walt Disney World Resort, the moon added the perfect spooky atmosphere to our parks, especially Magic Kingdom Park, which is already decorated for Halloween. Our photographers David Roark and Matt Stroshane were on hand to document the moon’s path over our parks.

Here’s how a blood moon works and why it’s significant: Full lunar eclipses happen maybe once each year, but blood moons that light up with color are extremely rare. Their bright red “blood” color happens when planet Earth is perfectly positioned between the moon and the sun – and the sun is able to shine only a small ring of red light past the earth and onto the moon (sort of like a worldwide sunset is reflecting on the moon). This morning’s blood moon is the second blood moon in a rare tetrad (a series of four) that will appear in 2014-2015. The next two blood moons are set to appear on April 4 and September 28, 2015.

Be sure to click through the gallery above to see the blood moon make its way over Walt Disney World Resort.