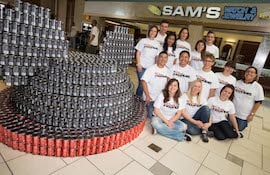 Anyone who has attempted to build anything knows how challenging and time-consuming the task can be. But with a can-do attitude and a giving spirit, it was an easy venture for a group of Walt Disney World Resort cast members who built larger-than-life sculptures using nothing but cans of food!

During the recent CANstruction Orlando food drive and design competition, it was impressive to see two teams of Disney VoluntEARS in action as they stacked more than 11,000 canned and packaged food items to create an iconic pair of mouse ears and a tribute to Disney’s beloved attraction “it’s a small world.” Their desire to give back to the community was in full display as they carefully and strategically stacked one can at a time.

Following the annual CANstruction event, everything used in the sculptures was donated to Second Harvest Food Bank of Central Florida, a nonprofit that Disney has supported for more than 20 years donating several million pounds of food through its “Disney Harvest Program.”

Take a minute and see for yourself how these Disney VoluntEARS got everything to stack up!