‘Once Upon a Parade’ – Bonus Feature – ‘Sleeping Beauty’

To call “Sleeping Beauty” a classic is certainly an understatement. With its extraordinary story and unforgettable characters, it’s thrilled generations of filmgoers. Of course, at Disney Parks, it inspired the Imagineers to build our very first castle at Disneyland park. And it continues to inspire magic in our parks to this day, including many elements of our brand new, “Disney Festival of Fantasy Parade” at Magic Kingdom Park.

So, we’re excited that a brand new Bonus Feature, “Once Upon a Parade”, all about the creation of “Festival of Fantasy”, is making its debut on the Diamond Edition Blu-Ray of “Sleeping Beauty” today! (It’s available in Digital HD, too.)

Some of my favorite projects here have been collaborating on other Bonus Features for titles such as “The Jungle Book” and “The Little Mermaid.” So, we were so excited to again have the opportunity to work with our friends at the Walt Disney Studios.

It’s a behind-the-scenes look, of course. But, this time, the filmmakers are showing you a whole different kind of magic – something you’ve never seen before! Who better to create a Disney Parade than the citizens of Fantasyland themselves – and this film will show you how they did it!

As you know, we love to give you a little “backstage” look at our filmmaking process – so, here goes: This film utilized two tons of hay, plus smoke, thunder, lightning effects, half a ton of feathers, a snow machine … and every frame of it was shot inside Magic Kingdom Park. 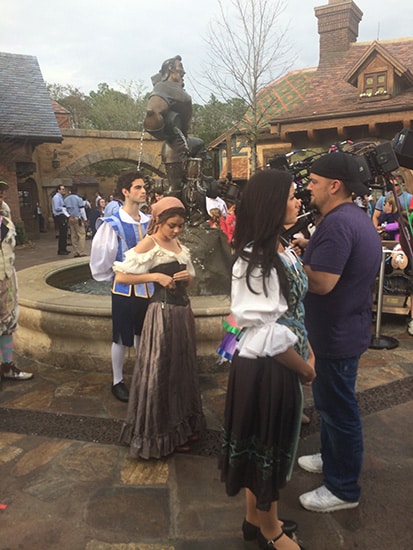 “Once Upon a Parade” stars the amazing Sarah Hyland from ABC’s “Modern Family”, and we had a fantastic time working on the project. I’m not certain I know a bigger fan of the Disney Parks than Sarah – she might know more Disney trivia than any of us! Check out the video, where Sarah talks about the project, her passion for all things Disney … and even gives you a sneak peek at the Bonus Feature, too!

“Sleeping Beauty” releases today, for the first Time on Diamond Edition Blu-ray and Digital HD. Go get your copy!

Likes (0)
Share ‘Once Upon a Parade’ – Bonus Feature – ‘Sleeping Beauty’