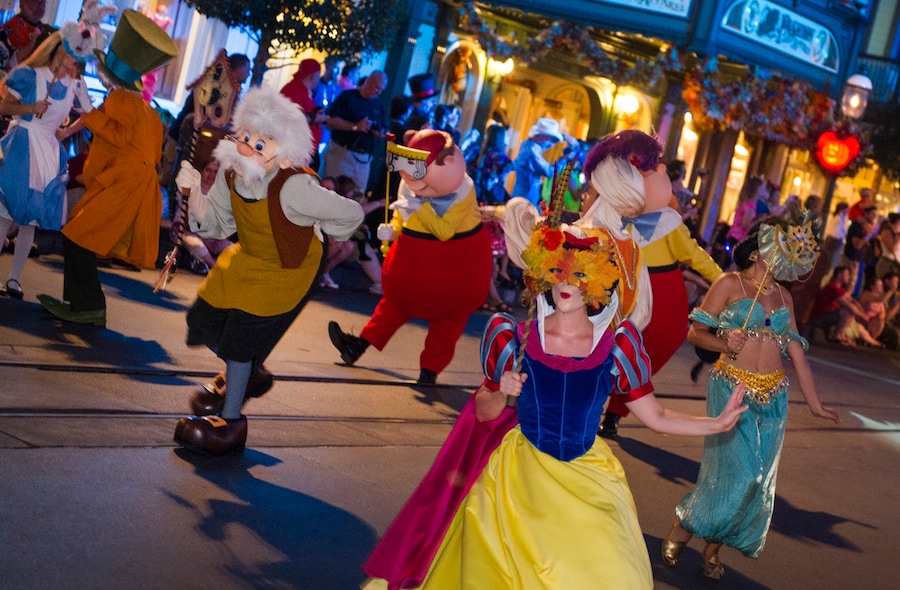 Even if you’ve never met Tara (and she’s super nice), countless Magic Kingdom Park guests (perhaps including you) have cheered the artistry of Tara, along with the creative team, singers, dancers, characters and villains that make Mickey’s “Boo-to-You” Halloween Parade one of the all-time most popular features of Mickey’s Not-So-Scary Halloween Party. Tara sat down (something she rarely gets a chance to do) and told us about her boo-tiful baby.

GREG: You know this parade backwards and forwards, the way Queen Elsa knows advanced refrigeration. What is the “story” that unfolds as we watch the parade?

TARA: The story of the parade is that Mickey and his Magic Kingdom friends are having a series of parties. So, the first scene is Mickey’s own party. It kind of represents Main Street, U.S.A. because he, Minnie, Donald and Daisy are in a quaint gazebo. He’s invited friends like Snow White, Dopey, Pinocchio, Gepetto, Alice, the Mad Hatter, Aladdin, Jasmine and Pooh. And Pluto has a new costume this year — an adorable lion!

Then the parade takes us to Adventureland, where it’s pirates, pirates, pirates! This year, we put Peter Pan and Wendy and some Lost Boys on the pirate ship. It’s my homage to the scene in the film where the pirates have them trapped and Peter comes to the rescue Of course, we have Captain Jack Sparrow, Barbossa and some crewmembers. That’s our Adventureland salute.

GREG: What songs do we hear during this sequence?

TARA: You’ll hear “Boo To You,” written specifically for the parade. It’s so catchy, we find ourselves still singing this tune to ourselves six months into the next year! There’s no question that every parade really starts with the music. For Hook’s ship, we have “Yo-Ho (A Pirate’s Life for Me)” from Pirates of the Caribbean and “A Pirate’s Life is a Wonderful Life” from Peter Pan.

The next sequence is Liberty Square and Haunted Mansion. It begins with the Groundskeeper and his dog, Jolene.

TARA: (laughs) Oh no, not at all! Our Jolene is actually a rescue dog, which is why none of the craziness going on ever phases her. The gravediggers — known as the Deadly Dozen — and our graveyard float follow Jolene and the Groundskeeper. This year, we doubled the number of dead waltzers.

GREG: I love the dead waltzers. So light on their feet!

TARA: Then, of course, the Hitchhiking Ghosts come along and the Grim Grinning Ghosts.

GREG: And those gravedigger shovels that spark. Is that a special effect?

TARA: Actually, that was a happy accident. We were backstage one night, just walking around a building and somebody was dragging a shovel and it sparked. It was like “Ooooohhh!” and we made it part of the show.

GREG: It’s such a simple thing! Everyone loves the shovels.

TARA: To represent Frontierland, we have a Halloween Hoedown. This year, our cowgirls have new costumes. We decided to give everybody cowboy boots and denim and just rock it out a little bit. The music there is mostly “Ghost Riders in the Sky” with a little bit of “Rodeo” thrown in. Clara Cluck sits up in her barn while Clarabelle Cow calls out the square dance for Chip ‘n Dale, Brer Bear, Brer Fox, Brer Rabbit and the Country Bears — Big Al, Wendell and Liver Lips.

GREG: And as everybody knows, a party is never quite the same without Liver Lips.

TARA: Isn’t that the truth! (laughs) From here, we change things up in the parade a little bit. Our Goofy’s Candy Company truck got an extreme makeover and it’s a new Sugar Rush delivery truck full of candy corn. Wreck-It Ralph rides the truck and Vanellope runs around, being Vanellope. The truck looks like it’s made out of candy. Really cute. Goofy’s Candy Factory is after the Sugar Rush truck.

GREG: Then lots of villains bring up the rear.

TARA: They get to be the grand finale. They’re singing “It’s Good To Be Bad” around a float carrying the Dead Head Band, and behind there’s the Queen of Hearts, Frollo, Big Bad Wolf and others. They’re on a villain float with Chernabog; we have Maleficent, Jafar and the wicked queen from “Snow White and the Seven Dwarfs.” New this year is the Bowler Hat Guy from “Meet the Robinsons” and he’s very, very funny!

GREG: How many months in advance do you start preparing this parade?

TARA: After the current parade has its run, we have a post-parade meeting to discuss successes and opportunities for improvement. Then around February, we talk about the event as a whole and determine what we might want to do in the coming year. If we’re going to revamp a float or create new costumes, they need the longest lead times. This year we started rehearsals at the beginning of August because we opened the party on September 1.

GREG: How does this parade rate on the “Tara Meter”?

TARA: On the “Tara Meter”? I don’t know — I’m not supposed to have favorites among my children! It is certainly one of my favorites. It’s just one of those things where everything came together just right. Yes, we tweak it every year. I love that it has that sort of flexibility to add and take away, but the core is so solid, you can do that.

GREG: It’s sort of like a great Broadway show. It might be revived dozens of times, but there are always alterations, the score changes, the chemistry of the cast varies and scenes are moved around. It’s always fresh.

TARA: Absolutely. And we do that. We want it to be fresh for our new guests and our many returning guests — and we’re grateful that there are so many. We want them to see the things that they’ll remember and want to see again and also be thrilled by new things. That’s why “Boo-to-You” is forever new!