Special Edition Wildlife Wednesday: What Do Rhinos, Art Auctions and Imagineers Have in Common?

World Rhino Day is officially recognized each year on September 22, and provides a great opportunity to share information and raise awareness about the exponential rise in rhinoceros poaching in the wild. While some are aware of the declining numbers of rhinos in the wild, many don’t have the opportunity to take the next step to help reverse the decline. Chad Harmon, a member of the team who works with animals in the Ituri Forest on Kilimanjaro Safaris at Disney’s Animal Kingdom, took matters into his own hands. He and his wife started a non-profit organization called The Horns and Heroes Project – an organization that combines the conservation of rhinos around the world with the passion and creativity of the art community.

The organization’s first event, in 2012, invited 50 artists from around the Orlando, Fla. area to decorate cast moldings of rhino horns. These decorated horns were then displayed at an auction event and 100 percent of the $6,000 proceeds were sent to the International Rhino Foundation. The ‘Heroes’ portion of the organization’s title comes in as the money donated supports the front line park rangers patrolling on the ground, risking their lives against armed poachers to keep rhinos safe in the wild.

So, that covers rhinos and art auctions, but where does Disney Imagineer, Joe Rohde, fit in?

This year over 70 artists decorated rhino busts that were auctioned off. Joe Rohde learned about the event and showed support by creating his own piece of artwork that was showcased along with members of the Orlando community and Disney’s Animal Programs. A Zoological Manager on the elephant team, Steve Lefave, created the piece of art that produced the highest bid – over $900! The piece, titled “Abbey Normal,” was created using several recycled pieces and depicts a “Frankenstein”-like rhino. When asked about his inspiration for the piece, Lefave said, “If we don’t protect the rhino, we will have to recreate it by some other means.” Lefave also spoke very highly of the organization with admiration that is “through the roof” because he knows all the work to save this species comes from the heart. 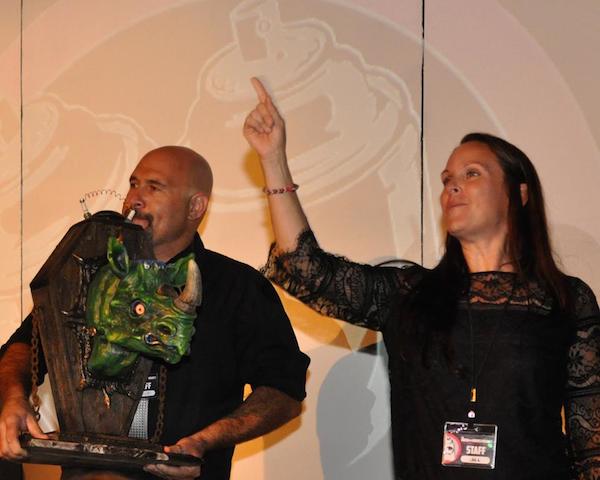 Inspired by the guiding principles of Disney’s Animal Kingdom, Harmon strives to inspire calls to action by exposing audiences to the subject matter and then provide a way to get involved. Harmon’s intention is to invite art lovers to come in the door, but then leave an art lover who is also a conservationist. The most recent event raised over $23,000 with over 400 people in attendance!

Organizations like this are just one way that Disney cast members are making a difference around the world. Keep an eye out for upcoming events in your area and opportunities to get involved in other conservation programs, organizations and initiatives!

Likes (0)
Share Special Edition Wildlife Wednesday: What Do Rhinos, Art Auctions and Imagineers Have in Common?