Yoo-Hoo! Have you heard? Wandering Oaken’s Trading Post, one of the most popular parts of last summer’s “Frozen Summer Fun LIVE!” event at Disney’s Hollywood Studios, is back and staying put through the holidays! 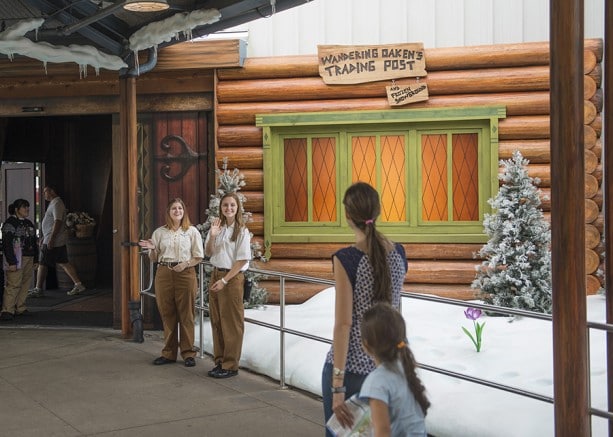 Oaken and his cousins have re-opened their cool hot spot (or is that hot cool spot?) in a new space, on Streets of America just steps away from Studio Catering Co. and “Lights, Motors, Action! Extreme Stunt Show.” The new Wandering Oaken’s Trading Post & Frozen Snowground! features a larger-than-ever play area with real snow, plenty of “Frozen” merchandise, and those yummy “Frozen”-inspired cupcakes and other treats. And every 30 minutes or so, you may even catch a glimpse of the Northern Lights shimmering in the night sky.

So if you want to build a snowman or are just craving one in cupcake form (that’s carrot cake with cream cheese frosting – YUM!), you’re in luck! Wandering Oaken’s Trading Post & Frozen Snowground! is open daily at Disney’s Hollywood Studios, through the holiday season.