When you hear the familiar harmony of the world-famous Dapper Dans, you instantly know you’re at a Disney Park on Main Street, U.S.A., right?

That’s why if you were in Dallas’ Love Field early Monday morning, you might have been puzzled to hear the barbershop quartet’s tunes echoing through the airport terminal. 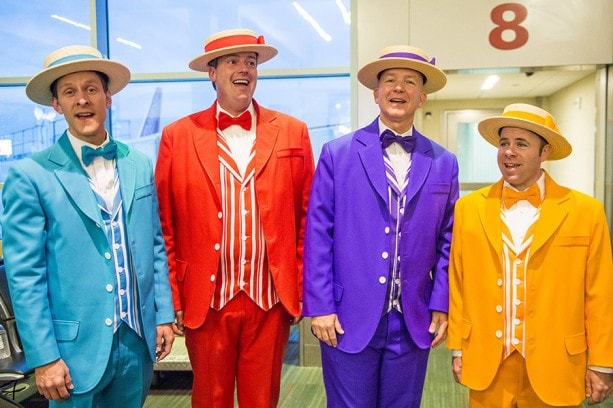 Prior to boarding, passengers were able to commemorate the flight by posing in front of backdrop of Cinderella Castle that served as a “Disney Side” family photo opportunity.

Then, the Dapper Dans began singing a selection of tunes from their harmonious repertoire. The quartet even debuted its new arrangement of “Let It Go.”

Aboard Flight #887, passengers listened as Jungle Cruise Skipper “Jungle Jane” made flight announcements in the attraction’s famous style of humor. (And it is true: when the plane flew through a passing shower, passengers saw the backside of water.) Mouse Ears and Mickey Mouse-shaped treats were given to passengers, as well as complimentary tickets to Mickey’s Not-So-Scary Halloween Party that evening in the Magic Kingdom. As the plane continued to Orlando International Airport, The Dapper Dans roamed the aisle of the airplane, providing one-of-a-kind, in-flight entertainment.

Take a look at this gallery of photos provided by Disney Parks photographer Ryan Wendler, as well as this video with host John Graham.