Three months ago, we shared the story of two loggerhead sea turtles that lumbered ashore under the cover of darkness to lay their eggs on the beach by Disney’s Vero Beach Resort. Lots of sea turtles nest like this elsewhere in Florida, but these two particular turtles are special. As you might have guessed, this was our first introduction to Anna and Elsa, our two loggerhead turtle princesses!

Anna and Elsa made their debut the following morning at Olaf’s Beach Party as Disney’s Vero Beach Resort team hosted an annual Tour de Turtles event! After being outfitted with satellite transmitters so that researchers can continue to track their movements, Anna and Elsa ‘let it go’ and began their trek back to the ocean. Both turtles, along with the other turtle competitors in this year’s Tour de Turtles, are swimming to raise awareness about the threats that sea turtles face. Anna is raising awareness about artificial light pollution on nesting beaches, and Elsa is raising awareness about plastic debris littering our oceans. Is Anna following her big sister, Elsa, just as she did in Disney’s Frozen? Check out tourdeturtles.org to see where they are now!

A few months have passed since we bid farewell to Anna and Elsa as they began their migratory journey to their foraging grounds. Meanwhile, many sea turtle nests are scattered across the beach, quietly incubating under the surface of the sand. Loggerhead sea turtle nests contain an average of 115 ping pong ball sized eggs. (The photo below depicts a life size model shown at this year’s event.) Both Anna and Elsa’s nests hatched during the past week, and we are happy to report some great news! 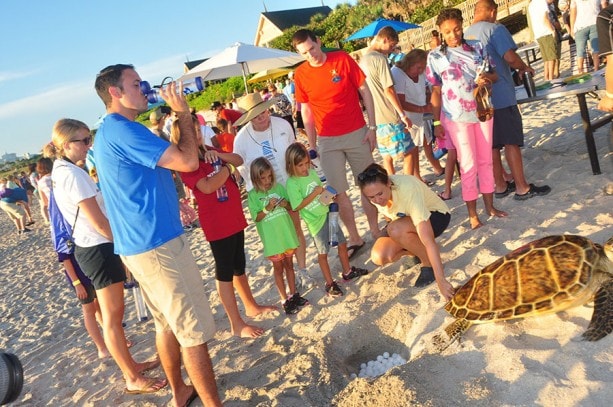 As the younger sister, Anna is a smaller turtle. Her nest had 72 eggs, 68 of which resulted in little hatchlings that successfully made it to the ocean. (The photo below shows Disney sea turtle biologists counting the eggshells after Anna’s nest hatched.) That means that 94% of Anna’s hatchlings were successful, just like their brave mother! (If we’re giving out letter grades, she gets an ‘A+’ for ‘Anna’ and the success of her hatchlings, of course.) Elsa, the big sister to Anna, produced a larger nest of 127 eggs, of which 115 hatched! Elsa even returned two weeks after Tour de Turtles to nest again on our beach, and that nest is still incubating. We’re thrilled that both Anna and Elsa’s nests were so successful. Please join us in wishing the little hatchlings the best of luck as they begin their first big adventure in the ‘big ol’ blue’!

On your next trip to the beach, you can help sea turtles like Anna and Elsa. Thousands of sea turtles accidentally swallow plastic debris that travels to the ocean through storm drains or flies from landfills, mistaking the small pieces for food. Pick up litter and you might save a turtle’s life!