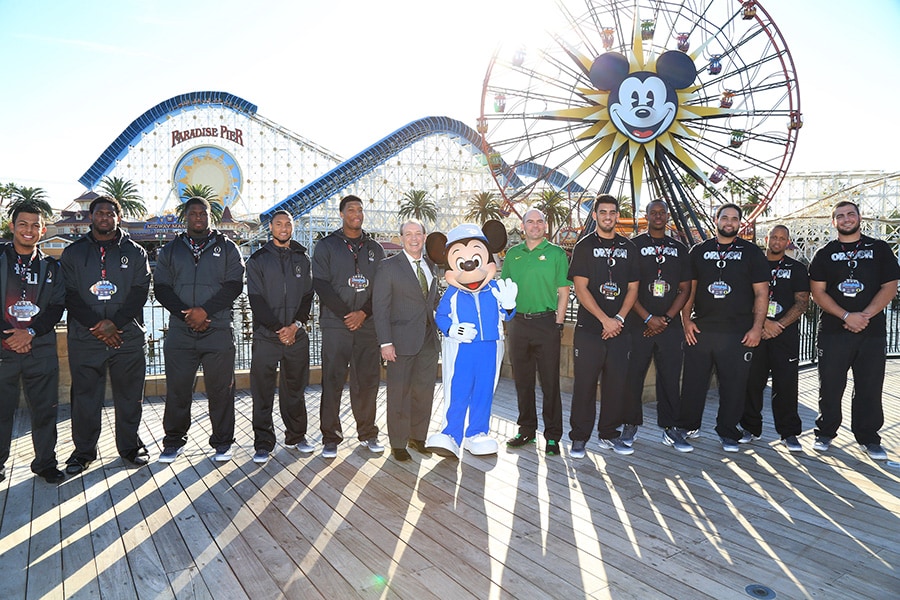 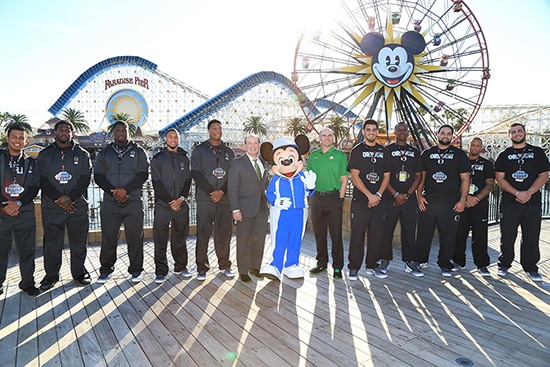 Where do 2015 Rose Bowl teams Oregon and Florida State go before they play in the 101st Rose Bowl Game on January 1, 2015? To Disneyland, of course! On Saturday, Dec. 27, in a ceremony at Disney California Adventure park, the No. 2 CFP-ranked Oregon Ducks – champions of the Pac-12 Conference – and the No. 3 CFP-ranked Florida State Seminoles – champions of the ACC Conference – met to celebrate their Rose Bowl match-up in the Playoff Semifinal at the Rose Bowl Game. The 2015 Rose Bowl marks one of the few times that the two most recent Heisman Trophy winners will face each other in a post-season game. We were excited to welcome Florida State quarterback Jameis Winston (left) and Oregon quarterback Marcus Mariota (right), here with Mickey Mouse.

Following the ceremony, each was invited to show their Disney Side with opportunities to experience popular Disney California Adventure park attractions, including Radiator Springs Racers in Cars Land and California Screamin’.

The 101st Rose Bowl game will be played in Pasadena on Thursday, Jan. 1, 2015. This first-ever College Football Playoff is broadcast on ESPN with back-to-back Semifinal Games being played on New Year’s Day. The No. 2 Oregon Ducks take on the defending national champions, the third-ranked Florida State Seminoles in the Rose Bowl Game presented by Northwestern Mutual at 5:00 PM/ET. Then at 8:30 PM/ET, the No. 1 Alabama Crimson Tide face the fourth-ranked Ohio State Buckeyes in the Allstate Sugar Bowl. The winners of these games face each other in the National Championship on January 12 in Cowboys Stadium. Watch the College Football Playoff National Championship on ESPN, Monday, Jan.12 at 8:30 PM/ET.