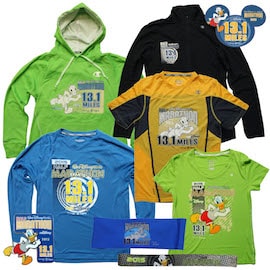 A few weeks ago a shared a look at the new Minnie Run Collection By Champion Athleticwear coming to the 2015 Walt Disney World Marathon Weekend. In that article, I promised a look at other items created by Disney Theme Park Merchandise for this annual event. As you will see in this story, we’ve created commemorative merchandise for every race taking place January 7-11, 2015 at Walt Disney World Resort.

For the majority of the races, we will introduce apparel for both women and men including short and long sleeved shirts, jackets, Sweaty Bands, Bondi Bands, pins and vehicle magnets. The Kids Races, Family Fun Run 5K and 10K will also have vehicle magnets this year.

One thing I’m most excited to see is the new limited release retail MagicBand with the runDisney logo (retail $24.95). Like all other retail MagicBands, this graphic MagicBand can be linked later making it a great gift for someone in training for a future runDisney race at Walt Disney World Resort.

This year marks the 10th anniversary of Goofy’s Race and a Half Challenge. All of the merchandise for this particular race this year includes an anniversary logo.

We also will be offering “I Did It” shirts for both women and men (I included a handful of options in the image above).

Finally, the event team is introducing a new “In Training” line for those who want a jump start on preparing for next year’s runDisney races.

These items and more will be released at Disney’s Health & Fitness Expo at ESPN Wide World of Sports Complex. The Expo will be open during the following times: