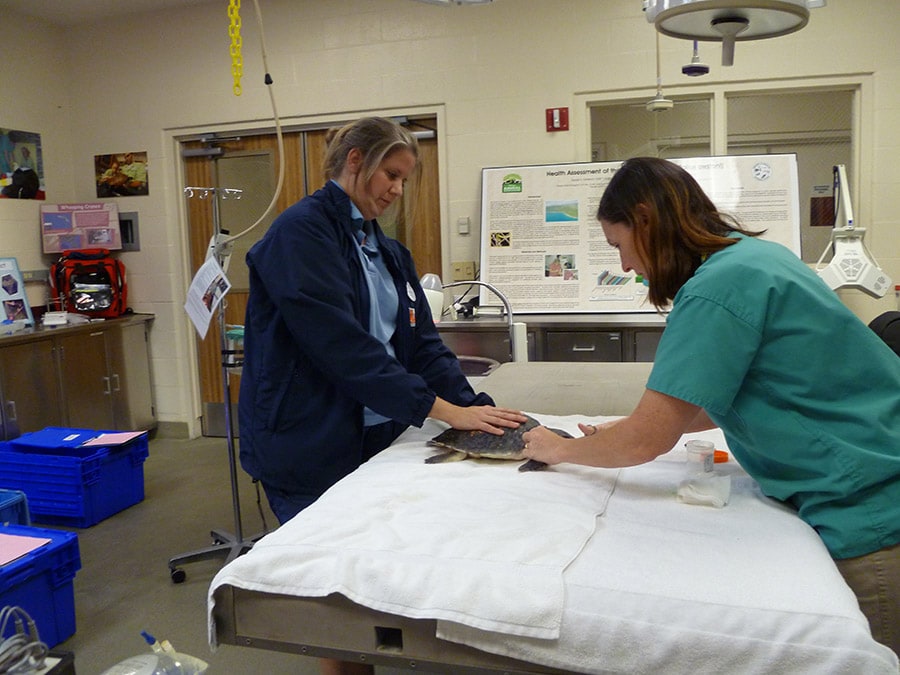 Eight cold-stressed Kemp’s ridley sea turtles were treated in recent weeks by Disney Animal Programs cast members. These were among hundreds of cold-stunned turtles that washed ashore at Cape Cod Bay, Massachusetts, following a sudden cold spell. The turtles were collected by volunteers from Massachusetts Audubon, and then taken to the New England Aquarium’s Rehabilitation Center in Quincy, Massachusetts, to be stabilized and warmed. When the turtles were ready for travel, the International Fund for Animal Welfare, with support from the Disney Worldwide Conservation Fund (DWCF), transported and loaded 193 critically endangered Kemp’s ridley sea turtles into a US Coast Guard plane for the trip south! Kemp’s ridleys are the rarest sea turtles in the world. The turtles being treated and warmed at Disney each weigh about five pounds and are two to three years old. This is an age at which little Kemp’s ridleys have just moved into coastal waters from the open sea. Most Kemp’s ridleys grow up in the Gulf of Mexico, but some are carried out of the Gulf and up the Atlantic coast by strong currents. These little turtles move into bays and estuaries from Massachusetts to Florida. During warmer months, there are lots of blue crabs and other crustaceans for ridleys to eat in these waters. When winter arrives, the turtles typically swim south to avoid cold water. However, if there is a sudden cold snap, the turtles can become trapped in the bays.

Sea turtles enjoy warm water and have a body temperature about the same as the water that surrounds them. When the water temperature dips below 45 degrees, turtles get chilled, lose their ability to swim, and immobile turtles begin to wash ashore.

Normally, ridleys and other sea turtles anticipate cold weather and move south in the fall. But the sandy spit of Cape Cod makes this seasonal migration a special challenge. The cape hooks out into the Atlantic and catches southbound turtles, which collect within Cape Cod Bay. Turtles caught in the bay can find their way back out, except when the onset of frigid weather is rapid, like it was in recent weeks. Under these conditions, turtles in the bay are literally caught out in the cold, and a sea turtle cold-stunning event occurs.

Emergencies such as this cold-stunning event often require a fast response. Through the DWCF Rapid Response Fund, we are able to provide emergency support to help animals when they need it most, like we did for these young endangered turtles.

The young Kemp’s ridleys taken in by Disney are now swimming in a backstage location at The Seas with Nemo & Friends to regain their strength. Plans are to release these rare turtles into warm Florida waters as soon as they are well.

Here at Disney, we hope to make an impact that will ensure that future generations will continue to be inspired and delighted by sea turtles. To that end, we have worked to protect endangered sea turtles by providing grants to conservation nonprofits through the Disney Worldwide Conservation Fund. Disney has helped support 115 projects protecting sea turtles and their habitat, with more than $1.8 million in funds since 1998.

Check out this video for behind-the-scenes footage of this rescue effort!