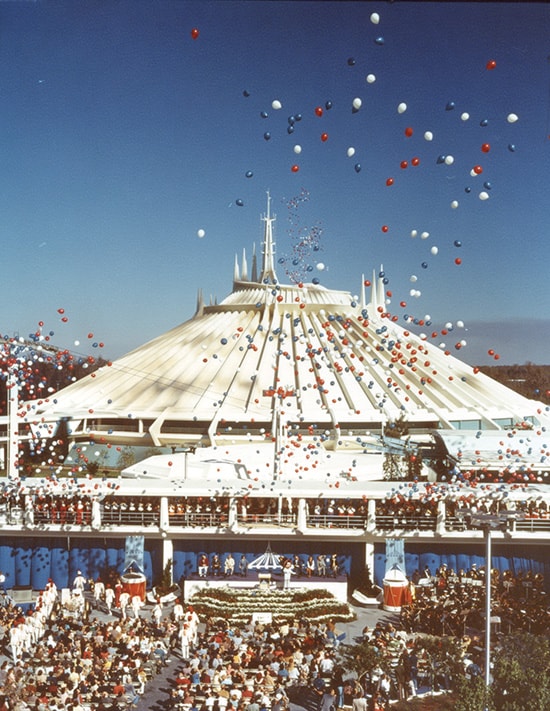 You may be aware that Space Mountain celebrates its birthday this month—it’s 40 years young!—as a beloved attraction. But do you know that it’s the oldest operating roller coaster in Florida? Or who were the first two stars to be launched into the Tomorrowland galaxy? Emmy-winning entertainer/producer Lucie Arnaz and Tony-winning Broadway legend Tommy Tune, that’s who.

The Space Mountain grand opening festivities were almost as elaborate as the opening of Walt Disney World Resort itself, so much so that a musical variety special was created for “The Wonderful World of Disney TV” show by Academy Awards producer Marty Pasetta. It was called “Welcome to the ‘World'” because it was the first network TV special to take place at Walt Disney World Resort (earlier broadcasts were either non-network programs or short previews).

We caught up with the versatile Lucie as she was finishing a triumphant national tour of the hit musical “Pippin.” She was delighted to gab with us about what went on behind the scenes during the opening festivities for Space Mountain, though she hadn’t watched the special in years but got the opportunity recently when Marty Pasetta sent her a copy.

So what was her reaction seeing the definitely-’70s (think groovy fashions and splashy production numbers) show again? “Fantastic!”

And she shared a tasty tidbit with us. Aside from the technicians who tested it out, Lucie and Tommy were the first two people to ever ride on Space Mountain, introducing the country to the soon-to-be fan favorite.

“It was just incredible fun. Nothing like you’d ever seen before. Because it was in the dark! A roller coaster is one thing, but when you were in the dark you couldn’t tell if you were going to go left or right or up or down—it’s like WLLAHH! Just amazing.”

To get the amazing shots needed for the special, more than half a dozen cameras were installed all around the inside of Space Mountain. And what you see is what you get—when you see the stars riding the attraction, they’re actually doing it, again and again and again, until the director was satisfied with the takes.

The song “I’m Flying” from “Peter Pan” was recorded before the taping and the stars lip synched to it while cameras rolled. They put speakers in the rocket and every time the director yelled “Action!” the song would play and they’d sing along to their vocal track.

Between singing and general screaming while riding Space Mountain, Lucie says her voice was “lost in space.” But she still calls it a “spectacular experience.”

During rehearsals, they’d open the park early for the stars and that took her back to another time. “I felt just like a kid again, back when my mom [TV legend Lucille Ball] used to take us to Disneyland.”

She and Tommy even got the chance to waltz together, by themselves, at night, in front of Cinderella Castle. It doesn’t get more magical than that.

A musical highlight of the show mentioned all the things you could do at Walt Disney World Resort—circa 1975—to the tune of “Holiday for Strings.” It begins with the line “They have a Mickey Mouse, a haunted house” and ends with “Grumpy, Sneezy, Bashful, Sleepy, Happy, Doc and … DOPEY!” Incredibly, Lucie remembers the song verbatim and even sang it for us.

As our conversation wound down, I asked Lucie if she’s had the chance to enjoy Space Mountain here in Orlando since she hosted the special. Her response was immediate. “Yes, yes! Several times since then. I’ve been to Disney World a lot with my kids.”

With all that Lucie Arnaz continues to accomplish, it’s gratifying to learn that she enjoys Disney Parks stuff just as much we all do. Obviously, the Space Mountain show wasn’t just a TV gig for her.

And that was the opening chapter for an attraction that is so popular, Space Mountain now exists at every Disney Resort across the globe. So when was the last time you enjoyed a rousing rocket ride to explore the wonders of outer space?