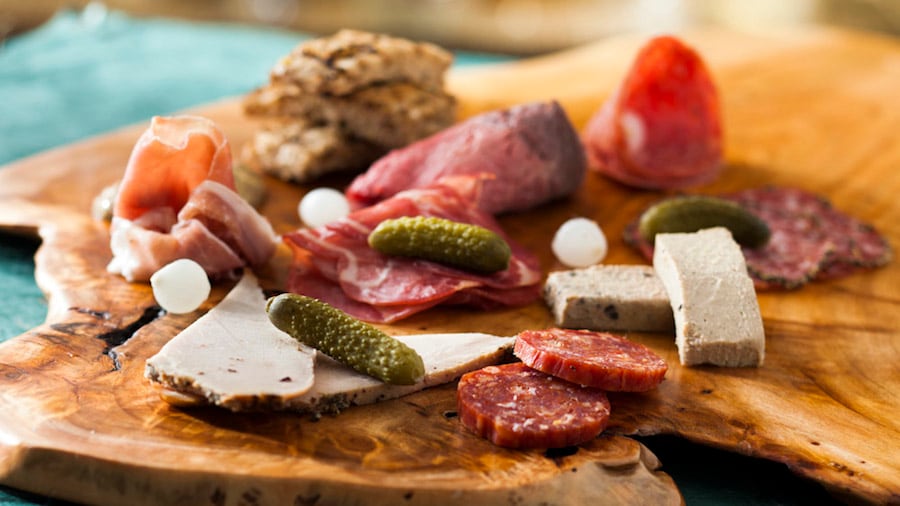 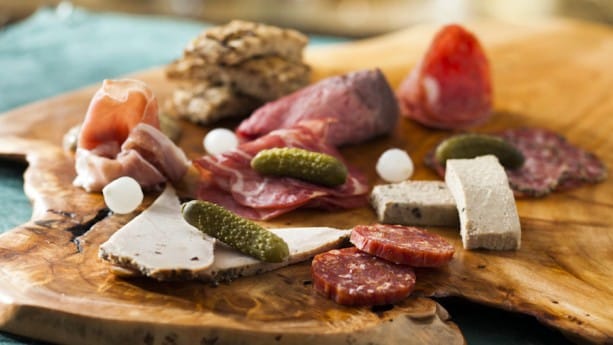 Charcuterie, the fancy French term for preserved meats, is an age-old food preparation that’s popping up on lots of Walt Disney World Resort menus. The newest at Trattoria al Forno at Disney’s BoardWalk made us want to try them all. 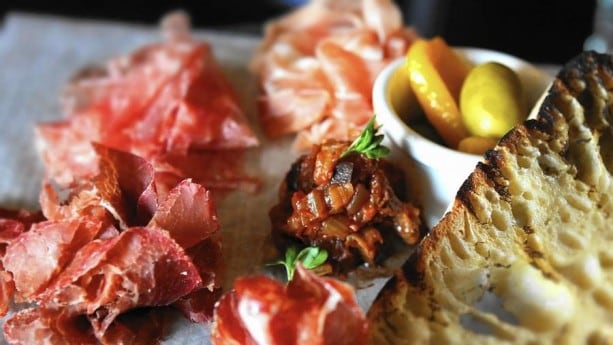 We love that Trattoria al Forno features cured Italian meats on the breakfast menu with tomatoes, hard-boiled eggs and cheese with fonduta (an Italian melted cheese made with Fontina cheese). What a way to start the day with a press pot of good coffee. For dinner, the restaurant pairs the charcuterie with house-pickled peppers, rich olives, caponata (eggplant) and grilled bread.

On the dinner menu at Be Our Guest Restaurant in Magic Kingdom Park, the charcuterie for two includes assorted cured meats and sausages with tart cornichons, pickled onions and a toasted baguette. Pair this one with a crisp white wine to enhance the flavors.

Over at Epcot, we head to two spots: Chefs de France in the France pavilion, and Le Cellier Steakhouse in the Canada pavilion. The dinner menu at Chefs de France include assiette campagnarde, a rustic assortment of French patés and charcuteries that is trés authentique. At Le Cellier, the generous platter of meats comes with grilled sourdough and buttery Italian Robiola cheese. 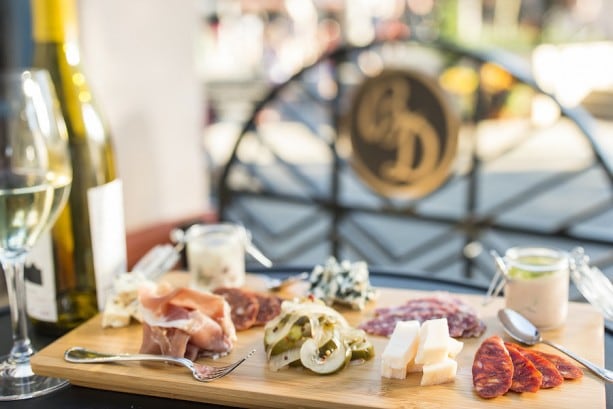 At Disney’s Hollywood Studios, stop by the al fresco Hollywood Brown Derby Lounge for the artisanal cheese & charcuterie board for two that features salami Calabrese, salami Toscano, duck rillette (similar to paté), imported prosciutto and paté de campagne. Relax with a Champagne or martini flight, or one of the craft cocktails or wines by the glass.

At Disney’s Contemporary Resort, California Grill starts with handcrafted charcuterie with seasonal accompaniments. Downstairs at The Wave … of American Flavors, American-crafted cheeses, country-style paté and artisan cured meats are the stars of the charcuterie board.

Others on our list: Kona Café at Disney’s Polynesian Village Resort mixes it up a bit with cured meats, olives, aged goat cheese, house-made bread and fruit compote on both the lunch and dinner menus. Yachtsman Steakhouse at Disney’s Yacht Club Resort kicks it up with suckling pig, country sausage, lardo and boar terrine on the charcuterie platter.

We’ll end over at cozy Territory Lounge at Disney’s Wilderness Lodge, the “Northwest Charcuterie” include cured meats such as venison and bison sausage, liverwurst; artisan cheeses like creamy Rogue River Blue, cranberry-mustard, sweet pickles and walnut bread. This calls for a Moosehead!