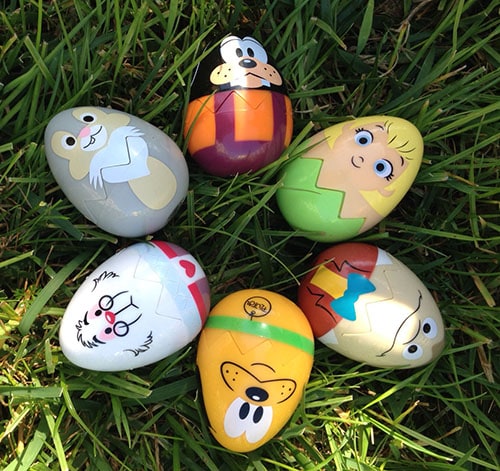 UPDATE 4/3/15: Egg-stravaganza maps are hopping on out of here! Maps are egg-stremely limited, please inquire at Disney Showcase in Disneyland park or Elias & Co. in Disney California Adventure park regarding availability.

I obviously didn’t need an egg-scuse this year to tell you about the return of the ever-popular Disney Egg-stravaganza at Disneyland park, Disney California Adventure park and Epcot! Here’s what you can egg-spect! From March 27 – April 5, 2015, you’ll be able to search for special hidden eggs themed to Disney characters at some of your favorite theme parks.

How it works, for eggs-ample!
Have fun eggs-ploring the parks hunting for eggs that portray Disney characters! I can tell you from personal egg-sperience, fans were egg-cited to participate, even taking it to the egg-streme. Just record your discoveries by placing the corresponding sticker on the specially themed Egg-stravaganza map to represent that location. Maps and stickers can be purchased for $4.95, plus tax, at the following parks and locations.

There’s no reason to walk on eggshells – whether you choose to hunt for eggs or not, return your map to a redemption location – Elias & Co. at Disney California Adventure park; Disney Showcase in Disneyland park or Port of Entry in Epcot – by April 30 and participate in an ‘egg-scramble’ to pick up your surprise.

I think you’ll be egg-static about the new surprises this year! They’ll bear a striking resemblance to what you are already searching for and will be an eggs-cellent addition to your collection. I’ll take it one step further if you pardon the egg-spression, and tell you this time, you’ll want to make sure you put all of your eggs in one basket, because all new characters have been gathered to delight you, no yolk.

Have I egged you on enough?