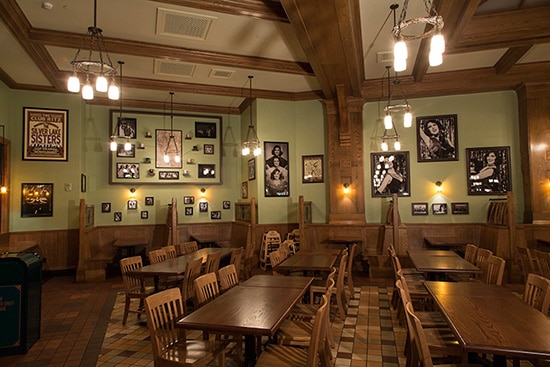 This 1930s-era eatery was established by Dolly, Dottie and Ethel Bounds, known professionally as Fiddler, Fifer & Practical (aka the Silver Lake Sisters). They spent a good part of their lives performing the vaudeville circuit, entertaining the troops in World War I and becoming minor celebrities in nightclubs along the then‐emerging Sunset Strip in Hollywood.

After 20 years of singing, dancing and playing their instruments (Dolly on violin, Dottie on flute, Ethel on piano), the sisters decided to put down roots on Buena Vista Street. The idea came from Ethel, the practical one. She had always handled the trio’s business affairs and was constantly urging her sisters to settle down and open a legitimate business. They finally agreed, joining together to open Fiddler, Fifer & Practical Café, with its name an homage to their act.

A wall inside the restaurant features photos, posters and memorabilia from the days when Dolly, Dottie and Ethel performed as Fiddler, Fifer & Practical – the Silver Lake Sisters. You can see them in publicity shots and in photos showing them performing on stage and relaxing or prepping backstage in their dressing rooms. A map of California shows the various places they’ve performed throughout the Golden State, and above the front window, marquee letters, spell out “Silver Lake Sisters.”

So the next time you’re getting a great deal on a square meal at Fiddler, Fifer & Practical Café, take a look around and discover the story of these talented ladies for yourself.

For more from “The Magic of Disney Parks Storytelling” series, visit the links below: