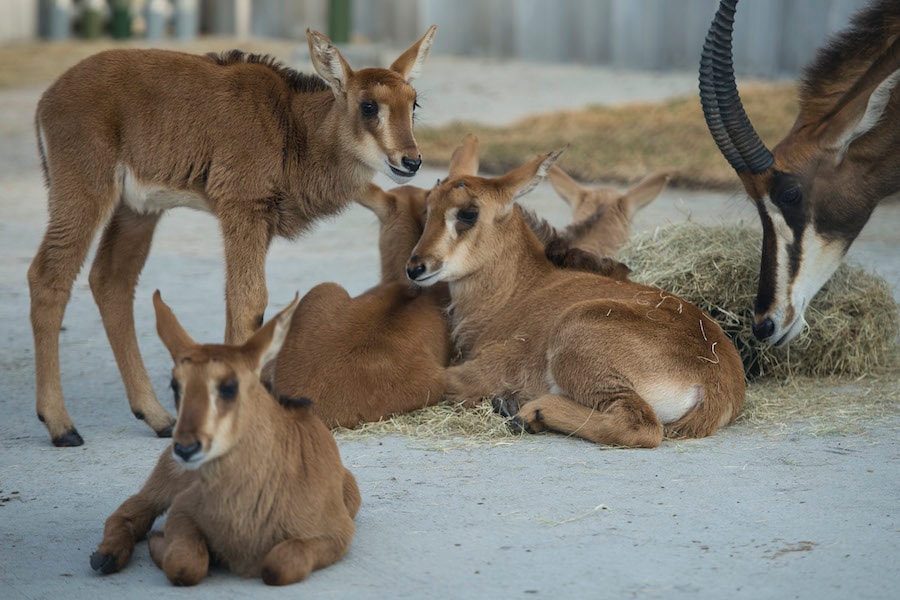 Hongera! That’s a Swahili word that means “Congratulations!” We are proud to announce that our sable antelope herd at Disney’s Animal Kingdom has nearly doubled in size as we welcome not one, not two, but five new sable antelope calves! Our team on the Savannah has been very busy caring for the family and closely monitoring the multiple births of three males and two females that all took place between December and January. Some of the sables are first-time mothers, so we now have three growing generations within our herd! (Congratulations to mothers and grandmothers alike!) Our animal care team at Disney’s Animal Kingdom is keeping up with the calves’ rapid growth by examining the baby sables’ progress with periodic weight check-ins and observations of nursing, while the adult male keeps a close watch. When the calves aren’t nursing, they love to sunbath and explore!

Sables are born with a short, glossy and sandy brown coat that will darken with age. Sable antelopes have white markings on their faces, bellies and bottoms with a black mane and dark tail tuft. Once they start to grow horns, their horns will be long and curvy and can grow up to five feet in length! Sables love to graze for most of their day. In the wild, they are usually found in dry, open woodlands with lots of tall grass in the southern parts of Africa. While the sable antelope does not stand very tall (just over four and a half feet on average), they have strong, sturdy legs, a thick neck and adult males can weigh over 500 pounds!

In regards to their population and conservation status in the wild, sable antelopes are commonly labeled as “of least concern.” However, they are notably diminishing and are considered conservation dependent. This means the sable antelope population requires our conservation efforts for survival. Since we are responsible for protecting these beautiful animals, all breeding efforts are coordinated through the Association of Zoos and Aquariums (AZA) Species Survival Plan (SSP). The SSP is meant to strengthen long-term species survival efforts by helping AZA-accredited zoos and aquariums manage species’ genetic diversity through detailed records of individual animals.

Since the sable antelope’s primary threats are loss of habitat and human encroachment conflicts, it’s our responsibility to help keep them safe in the wild. If we discontinue any efforts that affect them, their numbers will dwindle to extinction.

Through guest contributions to the Disney Worldwide Conservation Fund (DWCF), we have supported projects like ecosystem monitoring and human-wildlife conflict mitigation that can benefit sable antelope and maintain their numbers in the wild. At home, recycling and bringing awareness to your community that animals like sable antelopes need us to survive can help immensely! Learn more about what you can do at Disney.com/conservation.

Be sure to come welcome the new sables in early April when the whole herd will make their public debut on the spacious Kilimanjaro Safaris savannah!