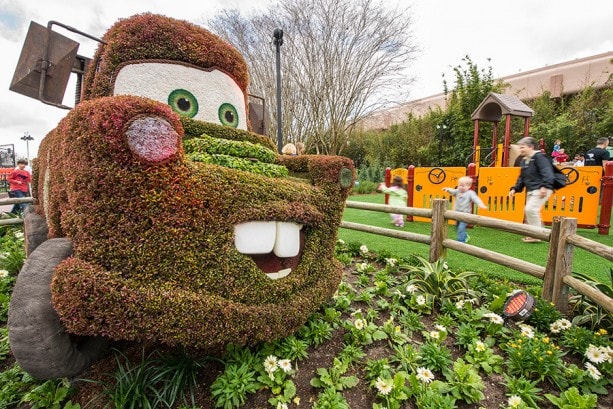 This week, we kicked off the 22nd Epcot International Flower & Garden Festival by highlighting some of the featured experiences and sharing what you can expect to see this year, including a closer look at our spectacular Anna and Elsa topiaries.

You can find the Anna and Elsa topiaries at World Showcase Plaza and other Disney-themed topiaries in other locations at this year’s Epcot International Flower & Garden Festival. Check out Victoria’s original story to learn more about the new specialty gardens, our Outdoor Kitchens, the Garden Rock concert series and more.

Also, Disney Parks Blog readers were among the first to learn that we’re expanding Soarin’ in Epcot and Toy Story Mania! at Disney’s Hollywood Studios. We are adding another theater at Soarin’ and more midway track at Toy Story Mania. We’ll also be updating the screens and projection system at Soarin,’ bringing a visually enhanced experience.

The expansions are expected to be complete by late 2016.

New Disney Side App Transforms You Into Disney Parks Characters – Our newest app, Show Your Disney Side, is now available for download and we think it’s going to be one of your favorites!