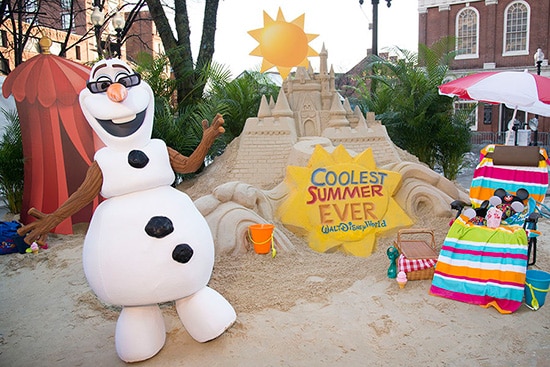 This week, we shared the exciting announcements that we’re kicking off the “Coolest Summer Ever” at Walt Disney World Resort as well as the Disneyland Resort Diamond Celebration with 24-hour events at both locations during Memorial Day weekend, the traditional start to summer.

To announce “Coolest Summer Ever” at the Walt Disney World Resort, we created a summer scene – inspired by Olaf’s “In Summer” dream – in winter-weary Boston that featured a 20-foot wide beach and a Cinderella Castle made of sand. Here’s a new behind the scenes look at how we did it.

At the Walt Disney World Resort, we’re hosting an all-night party at Magic Kingdom Park with 24 hours of nonstop fun from 6 a.m.-6 a.m. May 22-23. Guests are invited to dress to show their Disney Side while a selection of favorite attractions, entertainment, merchandise, food and beverages will be on tap all night long to celebrate the start of the “Coolest Summer Ever.”

At Disneyland Resort, the all-day/all-night celebration will begin at 6 a.m. on May 22 and will conclude 24 hours later at 6 a.m. on May 23. The event will include dancing and special character encounters at locations in Disneyland and Disney California Adventure parks, along with enchanting Disneyland Resort Diamond Celebration décor throughout the resort and, of course, the shows and attractions that our guests love.

Behind the Scenes: Three Michelin-Starred Chef Arnaud Lallement Discusses His Culinary Creations at Disney Cruise Line’s Remy – Chef Arnaud talks through some of what makes the cuisine at Remy so unique and exceptional. A word of warning before you watch … your mouth is about to begin watering!