This week, we kicked off our second annual “March Magic” tournament, sharing this year’s roster as well as a printable bracket to keep track of your choices.

The 32 teams inspired by favorite Disney attractions are competing for the title of ultimate Disney attraction. Daily attraction matchups are being posted on our official Disneyland Resort and Walt Disney World Resort Facebook pages and the final matchup between the top two attractions will take place on April 6. Let us know your favorite! 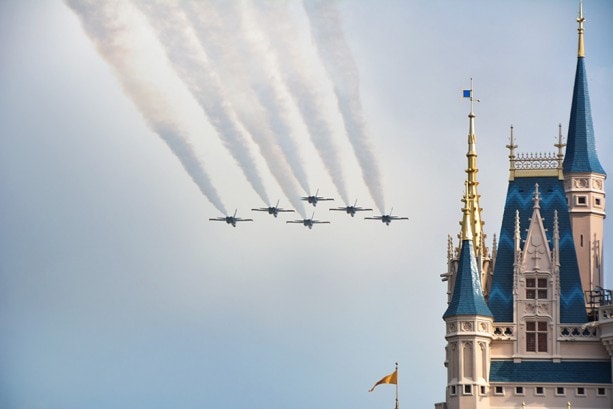 And thousands of guests at the Walt Disney World Resort looked to the sky at once this week to see the U.S. Navy Blue Angels perform two spectacular flyovers of Magic Kingdom Park. Our Disney PhotoPass photographers snapped our newest image (above) of the jets over Cinderella Castle. 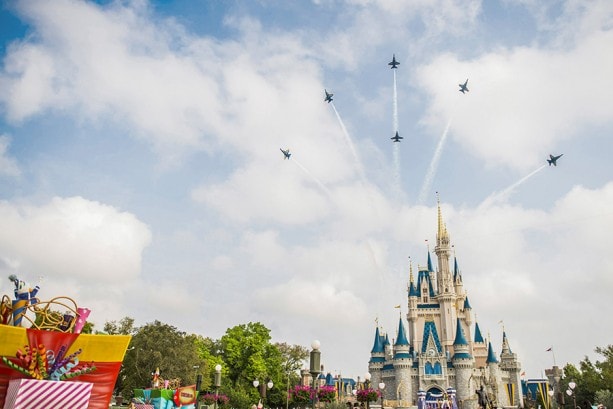 The six F/A-18 Hornet jets were traveling from their home base in Pensacola, FL, to an air show in the state and used the opportunity to entertain and inspire guests. Check out Bob’s original story to see some amazing video from the day.

Smokejumpers Grill Opens Today at Disney California Adventure Park – Get a look at this new quick-service location which honors the brave men and women who fight wildfires in California forests.

Disney Park After Dark: A Photo to Crow About from Disneyland Park – Disneyland Resort Chief Photographer Paul Hiffmeyer shares a unique image of a flock of noisy crows flying by Sleeping Beauty Castle.

Cinderella Coach is a Magical Treat at Disney Parks – Debuting this month at the Disneyland Resort and Walt Disney World Resort is a Cinderella Coach inspired apple. It’s safe to say that candy makers got a little ‘carried away’ with this concoction.

Baby Goats Make Their Debut at Disneyland Park – Watch video of our new baby goats at Disneyland park. Bernard and Bianca have been visiting with the guests at Big Thunder Ranch Petting Farm for a few weeks now, but we were able to capture this footage on their very first day out!

‘Frozen’ Summer Fun LIVE Returns to Disney’s Hollywood Studios June 17 – September 7 – One of the biggest highlights of the summer season is sure to be the return of “Frozen” Summer Fun LIVE at Disney’s Hollywood Studios, with favorite characters, unforgettable music, delightful enhancements and immersive experiences. Click through for more details!