As a part of my job I occasionally get to spend some time sorting through our photo archives here at Walt Disney World Resort, and every time I do, I seem to stumble upon something I just have to share with you Disney history fans. Such was the case when I came upon this rare photo of Orange Bird at Magic Kingdom Park. Over the years, we’ve released several pictures of Orange Bird in his native environment of Adventureland (and during his brief stint at Downtown Disney), but what’s unique about this photo is that it was snapped on June 11, 1971 – several months before the park’s October 1 opening. You can see that construction on Tropical Serenade (now Walt Disney’s Enchanted Tiki Room) was still underway in the background. Maybe he was looking for the perfect place to build his own birdhouse? 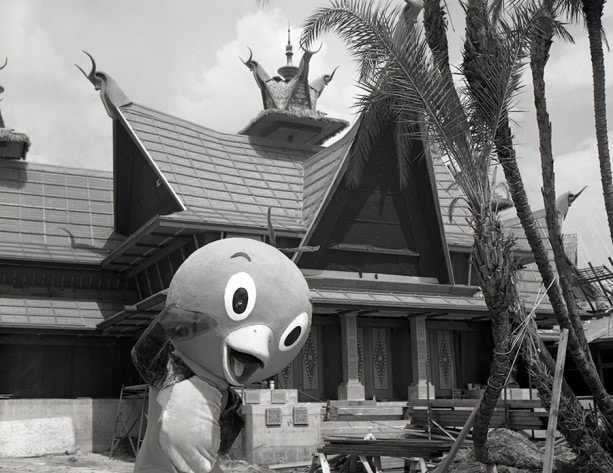 After the park opened, Orange Bird greeted families near Sunshine Tree Terrace for several years, where guests could also buy citrus drinks and Orange Bird merchandise. Orange Bird also once had his own record, which was released in 1971 to feature a tune called “The Orange Bird Song” that was composed by the Sherman Brothers (of “Mary Poppins” fame).

For more Orange Bird, check out the posts below: