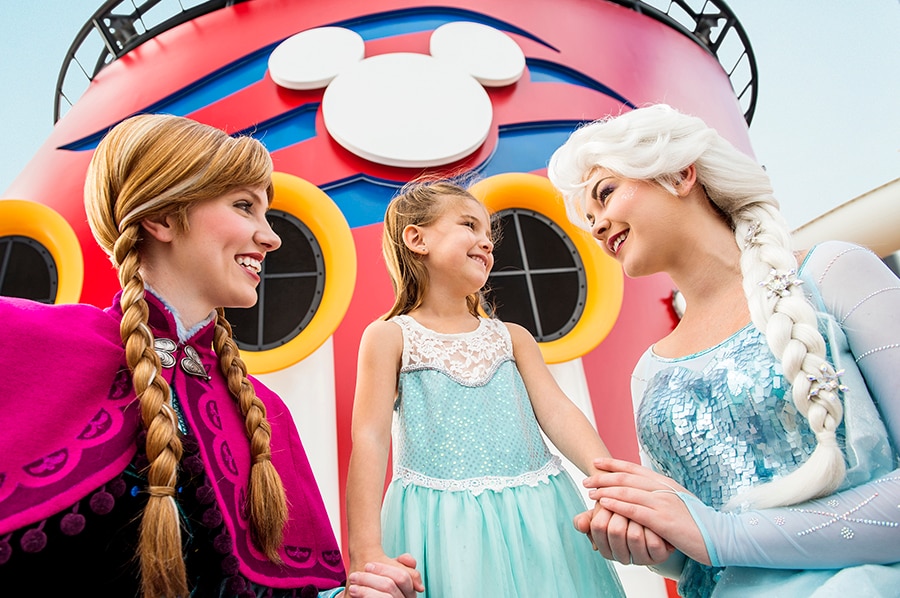 Who’s excited to hang out with your favorite royal sisters this summer?! We recently announced our brand-new “Frozen”-inspired experiences, and today I want to tell you more about the ones exclusively for Disney Magic and Disney Wonder cruisers. Starting on our summertime voyages in Alaska and Northern Europe, on one special day a cool arctic breeze will come through overnight and transform the ship into a winter wonderland. You’ll awake to discover a magical freeze has overtaken the atrium lobby with sparkling icicles adorning the grand staircase resembling the majestic mountain-top ice palace of Queen Elsa.

Feeling as if you’ve been transported to the Kingdom of Arendelle, you’ll be ready to begin the day’s adventures. In addition to getting warm hugs from Olaf, kids won’t want to miss “Anna’s Chocolate Chase,” a scavenger hunt for those who share Anna’s sense of adventure with a special surprise for finishing the game. They can also join the “Do You Want to Build a Snowman” activity where they’ll take on Elsa’s magical powers to make snow and ice! For families, there’s “Oaken’s Maypole Swirl and Twirl” where you’ll learn a traditional Scandinavian dance spinning and braiding giant ribbons, along with a specially themed dining experience that night including a menu inspired by traditional Nordic fare and special dishes inspired by the film. Then, the day of frozen fun culminates with an extravagant evening celebration, “Freezing the Night Away with Anna, Elsa and Friends.” By now, the freeze has spread to the upper decks of the ship, with giant snowflakes, icicles and snow-covered rocks.

During this high-energy deck party, you’ll sing and dance with the famous royal sisters of Arendelle and their fun-loving Nordic companions. After some fun line dancing led by Anna and Kristoff, their beloved companions, Sven, the trolls and Olaf, make virtual appearances. Sven engages the crowd in reindeer games like “Sven Says” and the “Troll Stroll,” and Olaf leads a sing along to his signature song, “In Summer.”

Later in the party, Elsa arrives with a snowy gust of wind, calling on guests to sing “Let it Go” with her as she conjures up a wintry spectacle to cool things down for Olaf. In true Disney fashion, Elsa unleashes her magic, sending a chill through everyone as the powerful Academy Award-winning song echoes from the ship.

I’m sure you agree this day is going to be pretty “cool.” Pun intended! If you missed Port Adventure Manager Arnaldo Zanonato’s post about Anna and Elsa’s adventure ashore with us in Norway, be sure to check it out to learn about yet another extra special experience you can get with us this summer.