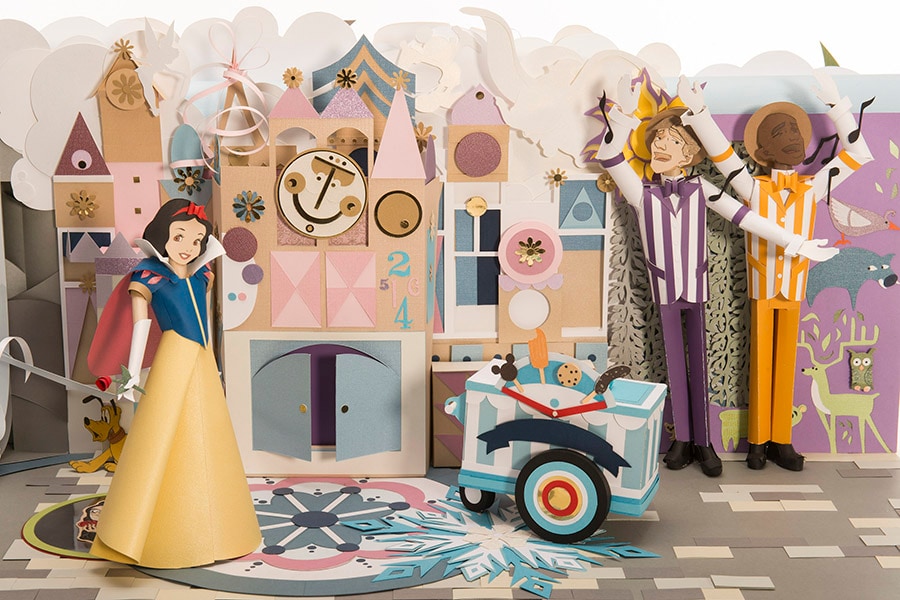 We’ve all felt that rush of excitement or burst of childlike enthusiasm that is your Disney Side — that part of your personality that only comes out when you’re in a Disney Park. Artist Britni Brault had that feeling in mind when she created a dazzling paper sculpture – it depicts the “real world” on one side and the #DisneySide on the other (as revealed by a 180-degree spin).

It took Britni more than a year of planning and about three months of work to construct the 3D sculpture you see below, called “Show Your Disney Side.” As you move around it, you see how a little Disney Magic turns a hair salon into Rapunzel’s tower. A travel agency becomes it’s a small world. Snow White and Jungle Cruise make appearances, too.

“I actually was raised in Anaheim and could see the Disneyland [park] fireworks from my house my whole life,” Britni says. “It was something that was a part of my life growing up.” Britni has previously done work for Disney Theme Park Merchandise and created sculptures of Mary Poppins and Bert, the Queen of Hearts from “Alice in Wonderland,” and Maleficent, among others.

Britni says her work is inspired by many artists who have worked on Disney films and Disney Parks – including Disney Legends Ken Anderson, Mary Blair, Alice Davis, Marc Davis and Blaine Gibson.

Below, you can take a a 3D spin around Britni’s “Show Your Disney Side” paper sculpture.

For a behind-the-scenes look at how Britni created this amazing paper sculpture, check out this time-lapse video.