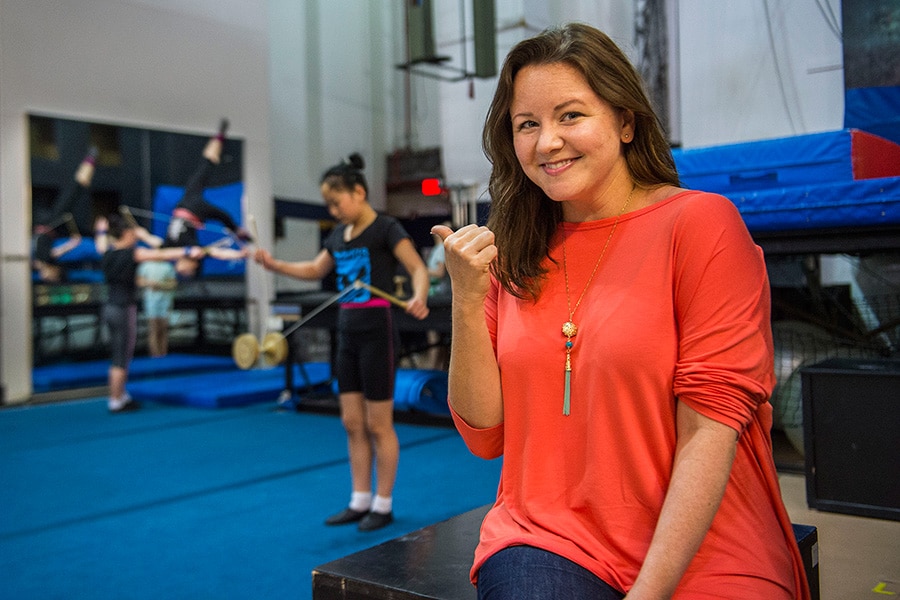 As a longtime fan of “La Nouba” by Cirque du Soleil, I’ve always wondered what happens behind the scenes. How much practice do the performers need? What time do they start doing make-up? Who helps them with their costumes?

I never dreamed I’d get the chance to peek behind the curtain, but recently, I had the chance to do just that. And the best part? Photographer Matt Stroshane joined me and captured several rarely-seen moments to share with you.

On the day we visited, one of my favorite acts, fondly referred to as “the diabolos,” were working on their routine. The young quartet from China practices five to seven hours a week (and it’s not uncommon to see some of the other talent working out nearby). It was dizzying to watch them balance, flip and spin just a mere few feet away. Check out the photo below – if you look closely behind my shoulder, you’ll see one of the girls is in mid-air, halfway through her backflip dismount. Even in sweats and messy buns, their nearly flawless performance left me breathless. Most of the girls will spend one to two years as part of the show and some may return for a second stint. My favorite new fun fact? The current coach was part of the first diabolo team who originally opened “La Nouba.” Also getting in some pre-show practice were a few of the trampoline artists. And yes, we got to witness that, too! Looking down from the rafters, we got a bird’s eye view of them for an entirely new perspective.

The backstage area was a flurry of activity as the curtain call neared. We ducked into the dressing room and caught principal performers putting on their show make-up. We also saw a glimpse of the costuming team in action, fitting one of the aerialists, putting finishing touches on hand-painted sneakers and sewing on glittering rhinestones. (The wardrobe room was a utopia of color, filled with fabric, sequins, wigs, props, and more costumes than I could count!) All the while, technicians supporting everything from lighting to audio were hard at work, prepping for the performance.

Now that I’ve seen what it takes to make “La Nouba” a success, I appreciate it even more. After browsing the gallery below, hopefully you will, too!