It’s Almost Time for an Exclusive Sneak Peek of Disney’s ‘Tomorrowland’ – Only in Disney Parks!

You wanted to see “Tomorrowland.” Here it comes!

Our sneak peek of the new Disney movie begins Friday, April 17, at Disneyland park. Head over to the Tomorrowland Theater for an exclusive look at scenes from the film, complete with special in-theater effects. And you can continue your “Tomorrowland” experience by exploring an all-new exhibit in the Starcade, featuring original props and production artwork. 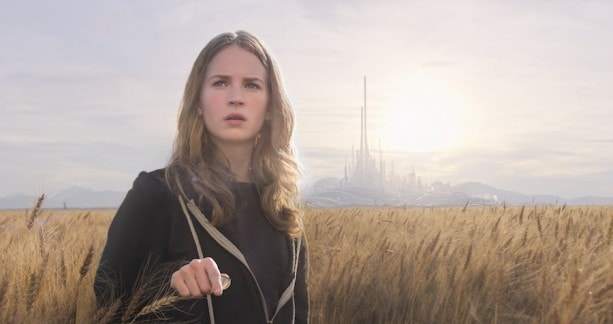 For those of you visiting Walt Disney World Resort in Florida, you can catch this Disney Parks-exclusive preview of “Tomorrowland” at Epcot, where the sneak peek begins its special engagement at the Imagination Pavilion in Future World on Saturday, April 18, and continues through May 24. At Epcot, you’ll also get a close-up look at one of the jet packs used in the film, along with a display of conceptual art and photos from the set.

In Disney’s riveting mystery adventure “Tomorrowland,” a jaded scientist and an optimistic teen embark on a danger-filled mission to unearth the secrets of an enigmatic place somewhere in time and space. Directed by two-time Oscar® winner Brad Bird, “Tomorrowland” stars Academy Award® winner George Clooney as scientist and former boy-genius Frank Walker and Britt Robertson as Casey Newton. Featuring a screenplay by “Lost” writer and co-creator Damon Lindelof and Brad Bird, from a story by Lindelof & Bird & Jeff Jensen, “Tomorrowland” promises to take audiences on a thrill ride of nonstop adventures through new dimensions that have only been dreamed of.

Here’s a look at the latest trailer for “Tomorrowland,” opening in theaters on May 22, 2015.