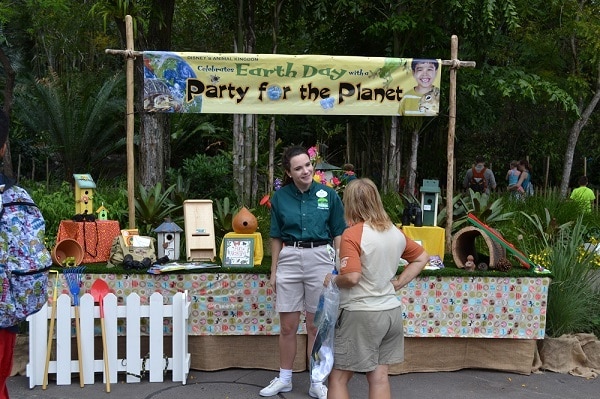 Over the next few weeks, a visit to Conservation Station at Rafiki’s Planet Watch should be a must-do on your itinerary.

After arriving in the land of Africa at Disney’s Animal Kingdom, hop aboard the Wildlife Express Train to make your way to Rafiki’s Planet Watch. Moments after disembarking from the train, you’ll have the opportunity to learn about exciting conservation efforts taking place around the world – some led by nonprofit organizations supported by the Disney Conservation Fund, and others supported by our own Disney’s Animal Programs researchers and educators.

Disney Parks Blog Exclusive: The fund recently opened a new gallery to showcase conservation programs implementing unique conservation solutions to address urgent threats facing today’s wildlife. If you’ve contributed to the Disney Conservation Fund, this is a great place to learn more about projects you have helped support, as well as ways our Disney cast members are leading conservation efforts around the world. On behalf of wildlife and wild places worldwide – thank you!

On Wednesday, April 22, exclusive Earth Day activities will be offered during our “Party for the Planet” Earth Day celebration. You can participate in interactive activities, explore limited time merchandise offerings, and interact with animal and education experts from Disney’s Animals, Science and Environment and the Disney Conservation Fund team about conservation projects currently in progress.

This year’s “Party for the Planet” celebration includes two exclusive “research stations” at Rafiki’s Planet Watch and the Main Entrance of Disney’s Animal Kingdom. These research stations allow you to see behind-the-scenes footage from the newest Disneynature film, “Monkey Kingdom,” while exploring how technology is used to enhance conservation efforts. You will have the opportunity to get an up-close, hands-on look at the technology scientists use to learn about animals, as well as the valuable data that comes from special equipment called camera traps. Many of the tools showcased at these research stations were used throughout production of the newest Disneynature film, “Monkey Kingdom.” This limited time offering is in partnership with Hewlett-Packard (HP) and Conservation International.

Thankfully, the “party” doesn’t stop after Earth Day. One of the best things about “Monkey Kingdom” is that for every ticket sold opening week (April 17-23, 2015), Disneynature will make a donation to Conservation International to help protect monkeys and other endangered species in their natural habitats! The Disneynature “Monkey Kingdom” research station at Rafiki’s Planet Watch will be open April 22 – May 20.

Rafiki’s Planet Watch has been one the best kept secrets at Disney’s Animal Kingdom … but hopefully not for long – we hope to see you soon!

Want to bring the fun of Disney’s Animal Kingdom and Disneynature “Monkey Kingdom” home? Download this free family activity packet for more information and fun activities for all ages.