Behind the Scenes: Inside the Bakery at Epcot’s France Pavilion

You smell it before you see it – that unmistakable aroma of freshly baked bread hot from the oven. As you enter Les Halles Boulangerie Patisserie in the France Pavilion at Epcot, all five senses are awakened when you smell the bread, see the beautiful pastries, hear the lilting sound of French, touch, then taste your favorite. Maybe a crisp baguette or buttery croissant. Or a Napoleon or macaron or éclair … maybe a jambon beurre sandwich or quiche Lorraine. So many choices, so little time.

Every single item in the bakery case is made by hand – in the on-stage bread ovens or in the bustling upstairs bakery where the crew arrives before daybreak to make buttery croissants, dense quiche Florentine and parfaits almost too pretty to eat. You’ll be hungry just looking at these delicious photos by Disney photographer Matt Stroshane.

We got a special behind-the-scenes peek at the expansive upstairs bakery that’s as big as Les Halles below, with cooks busy making crème brûlèe, slicing fresh Napoleon, piping éclairs and putting the finishing touches on chocolate mousse and strawberry tarts. A tray of freshly baguettes with ham and cheese with Dijon mustard butter, a classic Parisian sandwich, was readied for the first guests of the day. Freshly made macarons in jewel tones, light as a feather, were gently placed in little boxes. 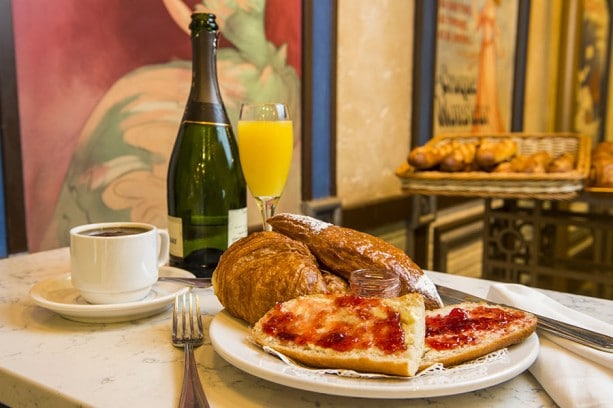 Behind the Scenes: Inside the Bakery at Epcot’s France Pavilion

Les Halles Boulangerie Patisserie opens at 9 a.m., ahead of World Showcase, and is a wonderful little hideaway for breakfast. The pastry team of 30, under the direction of Pastry Chef Olivier Saintemarie, starts their day at 5 a.m. and rotates throughout the day until 11 p.m. to make sure guests have the freshest taste of France.

We headed back downstairs to chat with Chef Baker Matthieu Cabon from Brittany, France, who, with his team of six, turns out 700 to 800 baguettes every single day, along with specialty breads such as brioche and croissants. He started baking at age 15, and studied only bread making for four years – “I mastered bread the old-school way … no shortcuts,” he says. It was the aroma that determined his career, he says, as well as the quiet of early-morning hours when bakers do their best work.

And, really, it’s just four ingredients: flour, yeast, salt and water, but you must add “know how,” says the chef. Everything at Les Halles is made from scratch, and it takes two days, start to finish, to produce a perfect baguette. His bakers make all the breads for Les Halles Boulangerie Patisserie, Chefs de France, Monsieur Paul and brioche for the pavilion’s ice-cream shop.

“For baguettes, day one is slow fermentation, then the dough sits overnight in a cooler to coax out the flavor,” says Matthieu. “Day two we divide it, shape it and bake. That’s it.”

But it’s the artisan touch that makes a perfect baguette. “Bread is all about feeling, but the real boss is the dough, which can be temperamental with temperature, weather and humidity,” he says. “Dough follows nature, and a good baker knows just by touching whether it’s right.”

For a perfectly flaky croissant, the chef explains that the folding process is a science. “It takes six hours to shape, then it’s baked the next day,” he explains.

And for tartines, which Americans call “open-faced sandwiches,” the bakery makes a rustic loaf with blistered, rugged crust and tangy soft inside – Chef Matthieu knocks on the crust and knows by the sound if it’s perfect.

Matthieu deftly inserts a shovel-like peel into the hot oven and slides out a dozen or so crackly loaves. From the hint of a smile on his face, you know it’s a good morning.

Likes (2)
Share Behind the Scenes: Inside the Bakery at Epcot’s France Pavilion