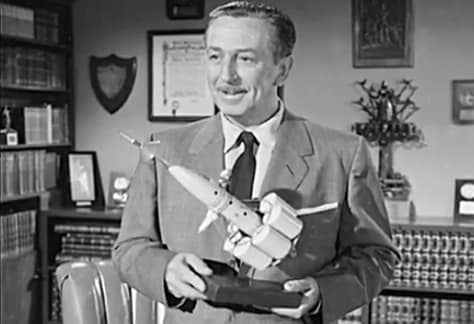 Walt Disney’s interest in progress, technology and making strides toward the future has always been something that has shaped Disney Parks, and has inspired new attractions and experiences since day one. During his lifetime, Walt led the charge in developing Audio-Animatronics technology, planned a Tomorrowland for Disneyland park that would allow people to taste what the future may be like, and dreamed of showcasing an “Experimental Prototype Community of Tomorrow” in his plans for Epcot.

According to “Tomorrowland” Director/Writer Brad Bird and Writer Damon Lindelof, it was Walt’s vision of the future that provided them with a lot of inspiration when creating their “city of tomorrow” for the film. Check out the video below to learn more.

The film “Tomorrowland,” opens in theaters nationwide on May 22, 2015. (Guests visiting Disneyland park and Epcot will be able to watch an exclusive sneak peek from the film starting this weekend, as well as see props and images from the movie. The Tomorrowland Theater at Disneyland park will host their sneak peek starting Friday, April 17, and the Imagination Pavilion at Epcot will open its doors on Saturday, April 18).