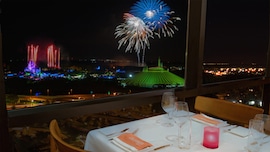 Has it really been 20 years since California Grill put Walt Disney World Resort dining on the culinary map? May 15, 1995, the date that the beautiful space was unveiled on the top floor of Disney’s Contemporary Resort with stellar cuisine and an equally spectacular bird’s-eye view of Magic Kingdom Park and Walt Disney World Resort. Reimagined in 2013 with new interiors and a new onstage kitchen and menu, the restaurant has not rested on its laurels.

Then there’s more fresh seafood, the BLT heirloom tomato flatbread with house-smoked bacon, and more local sweet corn, says Chef Brian, who has been at the helm at California Grill since 2009.

“To create the wow experience is the greatest feeling,” he says. “I have the opportunity to create amazing food with an incredible team.”

The most-ordered dish on the menu is the fork tender, oak-grilled filet of beef, right now paired with heirloom tomato risotto, a rich tomato-butter sauce, micro basil and a dash of aged balsamic vinegar. But if you ask Chef Brian for his favorite dish has says he’s partial to the tempura-fried soft shell crab with an espelette (red pepper) aioli and local red watercress salad.

And the beverages are as finely tuned as the food, thanks to area manager Michael Scheifler, who keeps a close eye on trends. “For spring and summer was are rolling out a seasonal beer menu, including the new Napa Smith Cool Brew from the only brewery in Napa Valley” says Michael. “We’re also adding a ‘Super Premium Spirit Page’ with offerings such as Bunnahabhain Single Malt Scotch, Pappy Van Winkle Bourbon and Hennessy Richard.”