Unforgettable Details of Aulani, a Disney Resort & Spa: Makahiki: The Bounty of the Islands

So far, the “Unforgettable Details of Aulani” series has shared the magic behind iconic locations at Aulani, a Disney Resort & Spa, like ‘Alohi Point, Menehune Bridge and Pu’u Kilo. Today we continue with an inside look at Makahiki: The Bounty of the Islands and how this delicious restaurant enhances the Aulani story for guests vacationing in Hawai’i. 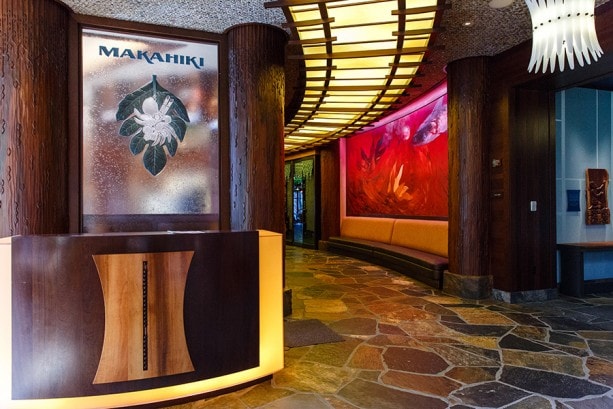 Aulani Cultural Advisor Kahulu De Santos shared with me that the traditional Hawaiian Makahiki season is actually during the fall months. “The sunset rising of the beautiful open star cluster Makali‘i (Pleiades), followed by the first visible crescent moon appearing at dusk, heralds the beginning of the Makahiki season,” she explained.

The story of the Makahiki season comes to life inside Aulani’s popular buffet restaurant in a series of artistic executions. A mural by leeward artist Solomon Enos highlights the powerful imagery and ancient protocols associated with the sacred time of the year. The colorful imagery gives Aulani guests a glimpse of the ceremonies and offerings presented to Lono-i-ka-Makahiki, the god of peace, rain and agriculture in order to bring fertility and prosperity to the land. 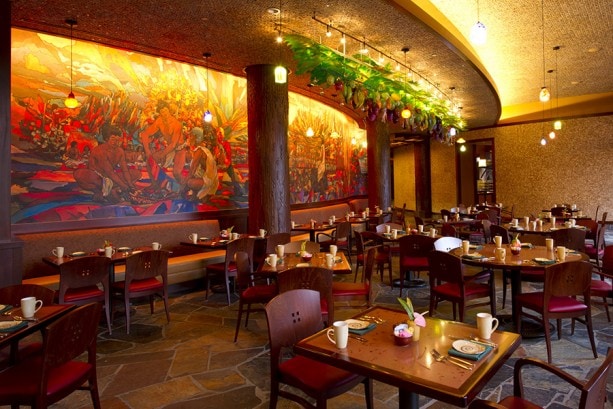 There are other notable design elements for guests to discover in the buffet area itself. For example, the curving walls are embedded with tiles made of coconut fiber that lend a natural and organic backdrop for the art. Look up and you’ll also see this Hawaiian treat used in another design element. In fact, the entire ceiling consists of coconut tiles, augmented by a scattering of mirrored glass mosaic tiles. Return to Makahiki in the evening hours – the design is very reminiscent of a starry night.

Let’s not forget about the delicious food offerings, too! Your ‘ohana will enjoy items like sliced island fruits, Asian-inspired entrées and more! Make reservations to say hello to some of your favorite Disney characters at “Aunty’s Breakfast Celebration at Makahiki” or have a delectable dinner in this one-of-a-kind restaurant with lots to discover here.

Do you have a detail at Aulani, a Disney Resort & Spa, you’d love to know more about? Let us know in the comments below!

Likes (0)
Share Unforgettable Details of Aulani, a Disney Resort & Spa: Makahiki: The Bounty of the Islands