Wildlife Wednesday: Celebrate and Learn More About Turtles at Rafiki’s Planet Watch and The Seas with Nemo & Friends at Walt Disney World Resort

Tomorrow is World Turtle Day®! To celebrate, we’ll have activities to satisfy your curiosity and inspire conservation of these magnificent animals. 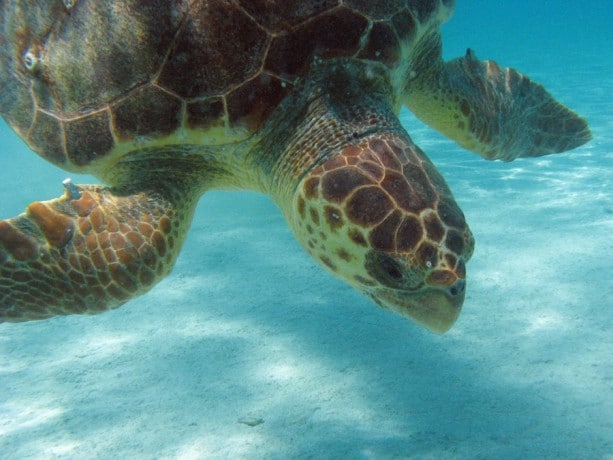 At Rafiki’s Planet Watch at Disney’s Animal Kingdom, you can try on a turtle shell, see how biologists find gopher tortoises in their underground burrows, learn how to best keep turtles as pets, attempt to untangle a plush sea turtle from fishing line using only your “flippers” and much more! At the Seas with Nemo & Friends at Epcot, you’ll be able to step through a turtle-excluder device. TEDs are special devices fishermen use in a trawl net to allow turtles an escape route if they are accidentally caught. You can also play interactive games to learn about the threats turtles face, while our sea turtles swim behind you in our 5.7 million-gallon tank. At both locations, you will have opportunities to ask specialists about our turtles and what they need to survive. In honor of the holiday, we have an exclusive Disney Parks Blog update from our Conservation Team. Many of you may remember last year’s Tour de Turtles at Disney’s Vero Beach Resort during which we attached satellite transmitters to two female loggerhead sea turtles that came ashore at the resort to lay their eggs. Affectionately named Anna and Elsa after our favorite “Frozen” Arendelle royals, the two ladies have been travelling hundreds of miles since we watched them return to the sea last summer.

Anna, the smaller of the two, had healed scars on her shell from an old boat-propeller injury. Ever resilient, Anna was able to swim in the Tour de Turtles. Because each turtle in Tour de Turtles is connected to an issue that threatens sea turtles, Anna swam to raise awareness about the threat of light pollution. Bright beachfront lighting from buildings and streetlights can deter nesting females and draw hatchling turtles away from the ocean, which is very dangerous for them. With a crowd of well-wishers cheering her on, Anna crawled down the beach at Disney’s Vero Beach Resort and back into the Atlantic Ocean. For about a week, Anna swam and drifted within Florida’s coastal waters and then headed south along the coast of eastern Florida. This means that the nest she made in late July was her last of the season. If Anna was like most loggerheads, this would have been her fifth nest!

Anna’s travels south took her to Key West, where she looped around the island and settled into a beautiful shallow seagrass pasture just north of the popular tourist destination. (Perhaps it reminded her of Arendelle?) Anna’s journey has totaled 661 miles! Elsa, the larger of the two female loggerheads, has a 40-inch long shell—that’s the height of an average 4-year old human! Elsa is swimming to raise awareness about the troubling amount of plastic debris in our oceans that many turtles mistake for food. 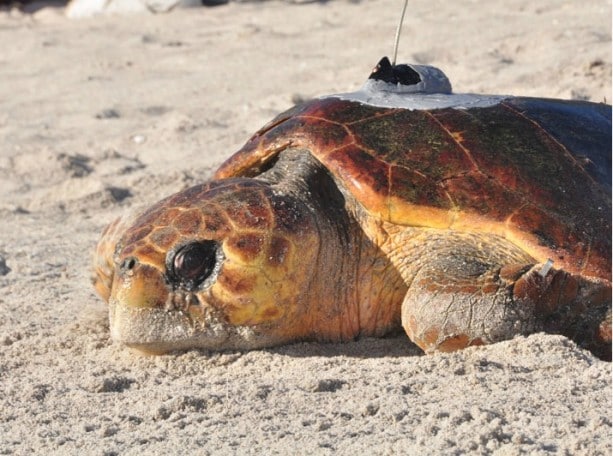 After Elsa left Disney’s Vero Beach Resort, she drifted for a few weeks within Florida’s offshore waters and eventually headed south. Like Anna, Elsa also swam toward Key West, but soon found her own path. She turned south to cross the Florida current toward Cuba. The strong, Gulf Stream current must have diverted her to the east, which put her on course for the Cay Sal Bank, a rich area of shallow seagrass between the United States and Cuba. This is where Elsa stayed for several months, until just recently when she looped closer to Cuba and back toward Cay Sal. Elsa’s journey has totaled 1,929 miles! That’s the distance from Orlando to Nova Scotia! 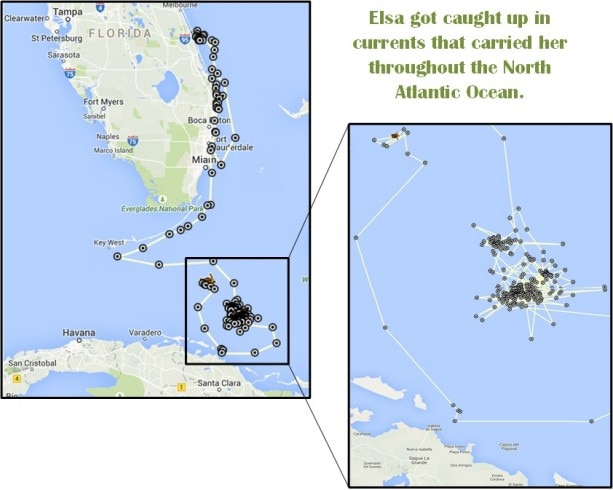 Want to learn more about turtles and our work to help conserve them? If you’re staying at Disney’s Vero Beach Resort this summer during nesting season, you can participate in a turtle night walk, during which you may see a female sea turtle lay her eggs on the beach! You can also check out our next Tour de Turtles event August 1 at Disney’s Vero Beach Resort, and don’t forget to celebrate turtles for World Turtle Day and every day at Rafiki’s Planet Watch and The Seas with Nemo & Friends!