There are more ways to enjoy the coolness of Disney’s Animal Kingdom than simply standing in the shadow of an elephant (and we can’t promise you can do that). Here are a few more refreshing options: Finding Nemo—The Musical. This is my personal favorite thing in the whole Park. Before they wrote the Oscar and Grammy-winning music for Disney’s “Frozen“, Bobby Lopez and Kristen Anderson-Lopez were already treating Walt Disney World Resort guests to their catchy, clever, melody-rich songs in this marvelous show, featuring a multi-talented cast of performers and delightful puppetry. Best of all, there’s an original cast album you can purchase in select Park and Resort shops or download on iTunes.

It’s Tough to Be a Bug! This 3-D comedy romp isn’t as flashy as some other attractions—mostly because it’s tucked beneath the Tree of Life—so like Alice, you have to wander down curious passageways to get to this buggy wonderland. It’s based on Disney•Pixar’s “A Bug’s Life“, so you’ll see good ol’ Flik along with as bad ol’ Hopper. The posters in the queue area are a hoot—spoofs of Broadway shows with insect twists If you listen carefully, you can name the tunes sung by the little tiny creature chorale.

DINOSAUR. This is my kids’ favorite Disney’s Animal Kingdom attraction. To them, no visit is complete without their taking a wild ride through time, dodging more dinos than Captain Caveman. We’re a Doctor Who fan family and appreciate being able to go back in time without a Tardis (though it’s fun to pretend that the phone booths at the Epcot U.K. pavilion are, like the Tardis, bigger on the inside than on the outside). 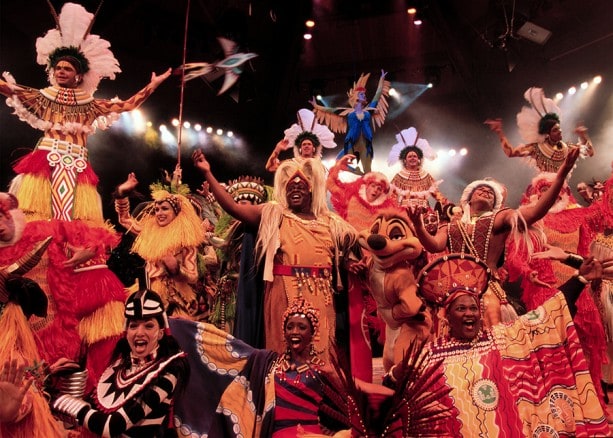 Festival of the Lion King. If you haven’t seen this magnificent show since it moved into a nice “new house” in Harambe Village, it’s cooler than ever in more ways than one. The exuberant performers, high-flying acrobatics and the Lion King characters make this an experience that is not only cool, but downright spirit-lifting.

Kali River Rapids. Getting splashed and spritzed with water is nature’s way to refresh and renew in the warm summer months. On Kali River Rapids, as you go bobbing along through the rapids where you get along swimmingly, your fellow park guests, perched upon strategically located bridge areas along the way, often add to the liquid sunshine by spraying you with water. It’s people helping people helping people. Isn’t that nice?