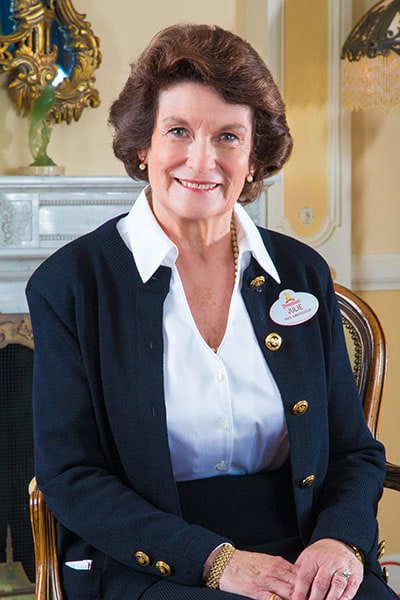 Julie Reihm Casaletto, who was selected to be Disney’s first Ambassador in 1965, was honored as a 2015 Disney Legend at the D23 EXPO, along with eight other beloved contributors to the Disney Legacy. Julie was one of five finalists in the fall of 1964 competing to become Miss Disneyland Tencennial for the park’s 10th anniversary, when the Disney Ambassador program was introduced to help Walt Disney represent Disneyland park throughout the world.

During her tenure, Julie was featured in a special 1965 TV episode of “Walt Disney’s Wonderful World of Color,” in which she appeared alongside Walt Disney as he showed viewers upcoming concepts for Disneyland attractions. “Working with Walt was a super learning experience,” Julie shared. “His creative genius often came with a boy-like excitement of discovery.” “My purpose was to share the joy, hope and happiness of Disneyland to communities around the world,” Julie said. “Those unforgettable experiences have continued to influence my life and career. For decades, Disneyland has been the pixie dust of my life. I consider Disneyland and all of its wonder to be home.”