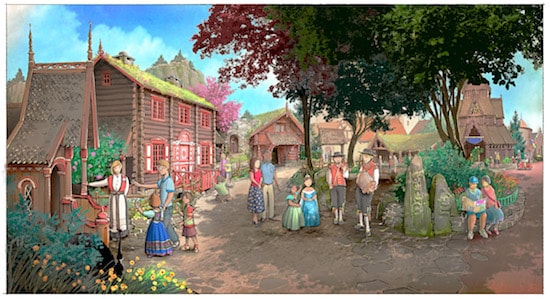 New details were released at the D23 Expo on the Frozen Ever After attraction and neighboring Royal Sommerhus that are currently being constructed at Epcot.

The Frozen Ever After attraction will transport guests to Arendelle just in time for the “Winter in Summer” celebration. According to Portfolio Creative Executive Kathy Mangum, the attraction’s project team is currently partnering with many of the talented individuals at Walt Disney Animation who helped bring the original “Frozen” film to life, as well as award-winning composers Bobby and Kristen-Anderson Lopez.

“We’re also expanding the Norway pavilion with the addition of the Royal Sommerhus – a charming cabin where guests will be able to meet Anna and Elsa,” Kathy said. “This cabin is based on an actual historic log cabin in Norway. In fact, in order to make sure we get the character and detailing right, we just sent our project team to Norway on a research trip to study the country and its cultural arts and crafts in person, just as the film team did.

“We’re confident that this attraction will bring more guests to the Norway pavilion and increase their interest and knowledge of Norwegian culture, just as the World Showcase was intended to do.”