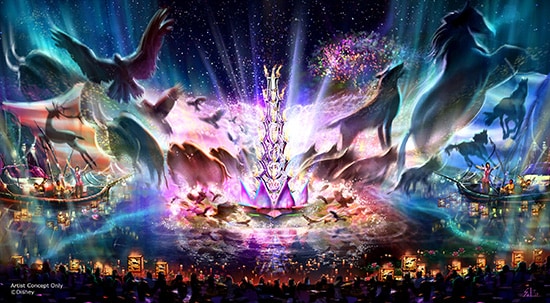 The new land at Disney’s Animal Kingdom that’ll immerse guests in the mystical world of Pandora from the blockbuster film AVATAR just received a name – Pandora – The World of AVATAR.

Pandora – The World of AVATAR is a key part of the expansion of Disney’s Animal Kingdom and will feature awe-inspiring floating mountains, a nighttime jungle of bioluminescent plants as well as an amazing new attraction called AVATAR Flight of Passage. This e-ticket attraction will allow guests to experience what it’s like to fly with banshees.

Walt Disney Parks and Resorts Chairman Bob Chapek shared the update on Pandora – The World of AVATAR at the D23 EXPO 2015. During the session, Imagineer Joe Rohde said one of the things that has made work on this project so special has been the collaboration with the Oscar-winning team behind the film – James Cameron, Jon Landau and the rest of the Lightstorm team.

“We’ve been working side-by-side with Jim and Jon to make sure that what we do is true to the story, characters and vision for the beautiful, mythical, epic land of Pandora,” Joe said. “We’re creating a transformational experience that you’ll remember for the rest of your life.”

Keep checking the Disney Parks Blog for updates on Pandora – The World of AVATAR.