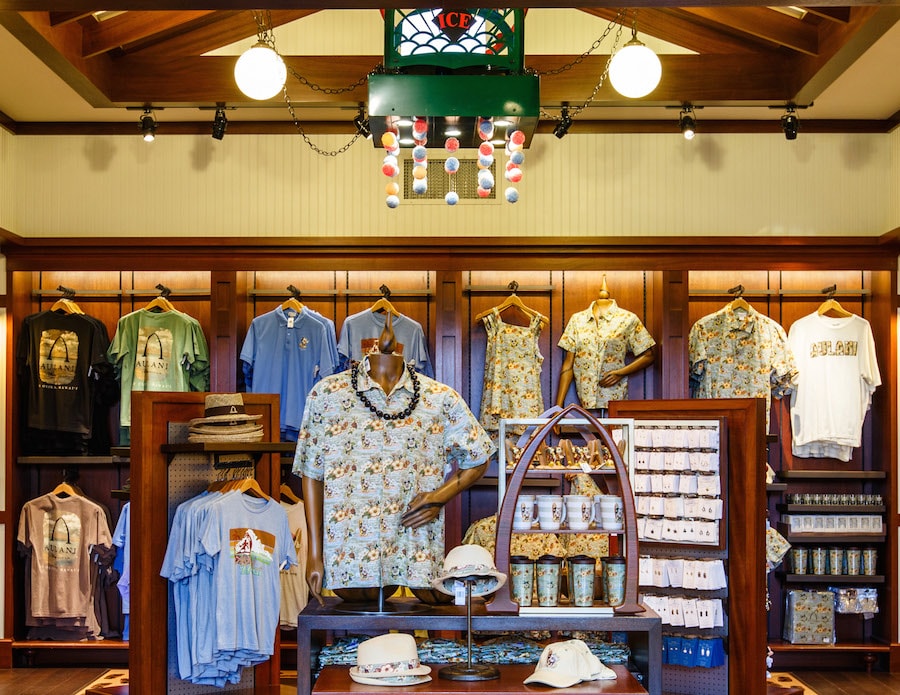 While my fellow blogger Michelle Harker typically shares updates on merchandise at Aulani, a Disney Resort & Spa, today I’m excited to share some of the unforgettable details found at Kalepa’s Store. Not only will you find unique gifts, apparel and Disney merchandise, but you’ll also discover details that make this charming shop a truly delightful place to visit during your Hawaiian vacation. Kalepa’s Store at Aulani is inspired by the traditional, family-owned general stores that have served island locals for generations. In Hawaiian, “kalepa” means “merchant” or “peddler” – or more literally, “to strike a flag.” In fact, peddlers would hoist a pennant flag with the image (fish, taro, etc.) to indicate the item that was for sale – much like the fish flags raised by fishing boats today to indicate the type of fish they’ve caught.

The store at Aulani takes inspiration from classic general store designs, but adds a contemporary flair. For example, a unique “Shave Ice” chandelier hangs at the shop’s entrance with playful red, blue and yellow scoops of shave ice floating beneath a classic shave ice machine. Some of my favorite unforgettable details at Kalepa’s Store are the photographs found throughout the shop. More than 40 black and white images adorn the walls, depicting modern-day general stores around the islands of Hawai’i. These special photographs honor the general store tradition that continues to thrive in Hawai’i today!