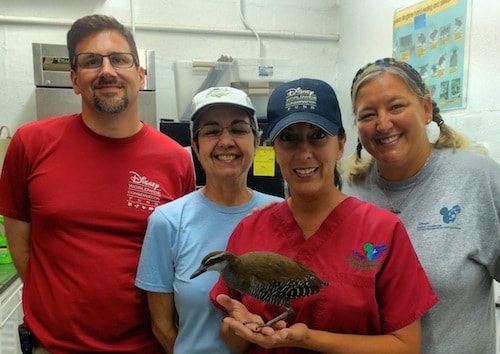 Not long ago, Dr. Deidre Fontenot shared with us her passion for saving an endangered species of a bird native only to Guam, the Guam rail. Dr. Deidre and her team travelled to the Commonwealth of the Northern Mariana Islands (CNMI) and Guam to continue their long-standing efforts to increase the islands’ population of endangered birds, including the Guam rail and another endangered bird, the Guam kingfisher.

The accidental introduction of a brown tree snake onto the island of Guam has decimated the island’s avifauna, which are those species of birds that live only in Guam. Several of those species have gone extinct, while more are on the brink. Brown tree snakes have no predator on the island, so they have reproduced in huge numbers and consumed nearly all the birds in Guam. During this visit, the Disney team helped relocate certain species of birds on one island to a nearby island where brown tree snakes don’t exist, to start a new population. We hope they will multiply and be less susceptible to extinction.

They documented their adventure with photos in the slideshow below.

While we may not have Guam rails or Guam kingfishers for you to see at Disney’s Animal Kingdom, we soon hope to show you have another bird native to Guam— the Mariana fruit dove! You can look forward to seeing this dove in the aviary on Maharajah Jungle Trek. We hope the dove will be a conservation ambassador for its species and help tell the story of our work to save these magnificent animals. You can hear more about this story and many others as part of Backstage Tales, a behind-the-scenes tour of our animal care facilities, at Disney’s Animal Kingdom.